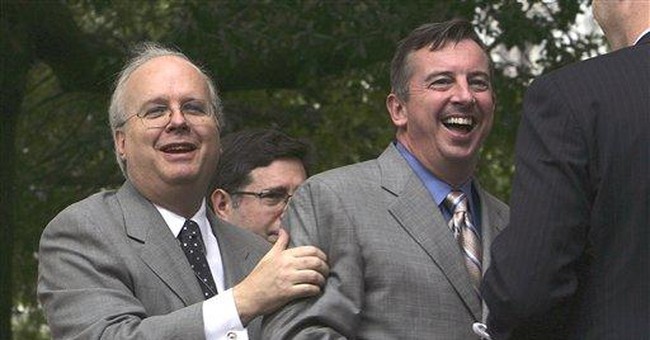 There's an old maxim that if Napoleon had been struck by a cannonball on his way to Moscow, he would be remembered as an unrivaled military genius and liberator. But Napoleon overstayed history's welcome and was treated harshly for it, first by the Russians and Mother Nature, then by his own people and, ultimately, by historians.

In this and other respects, Karl Rove strikes me as a Napoleonic figure. He won an impressive string of campaigns. He dreamed of erecting a new political order on the ashes of the old. He'd look awfully dashing in one of those bicorn hats. Most of all, Rove - who announced he will retire Aug. 31 - stubbornly refused to depart the scene on a historic high note.

Now of course, the comparison has its limits. Rove is not a bloody-minded invader or a dictator with scant regard for civil liberties - though you might think otherwise if you get all of your news from left-wing blogs. Yet he fits the picture, because if Rove had left the White House after George Bush's re-election in 2004, he would have been a hero, a man remembered as one of the great political tacticians of the last half-century.

Obviously, Rove was aided in his 2004 task by the fact that the Democrats nominated John Kerry, a Michael Dukakis without the brains. But Rove and then-Republican National Committee Chairman Ken Mehlman managed to help Bush increase his support among blacks, women, Latinos, independents and urbanites and defeat an opponent who got 8 million more votes than Al Gore. Republicans held onto the House and Senate, too - a feat not equaled since FDR's re-election in 1936. Coming on top of GOP gains in 2002, it was a remarkable achievement.

And then winter came.

Bush traded his political capital for the magic beans of Social Security reform, but the ground was too frozen for the seeds to take hold. Rove deserves mixed praise for the effort. It was courageous, but, as Bush's political brain, he should have seen that it was doomed to failure. As Napoleon said, if you set out to take Vienna, take Vienna.

Napoleon might also have said, if you set out to pacify Baghdad, pacify Baghdad. Yet as the American public soured on the Iraq project, Bush's political ear - i.e. the receiver of advice from Rove - transmogrified from gold to tin. Hurricane Katrina, Harriet Miers, delaying the defenestration of Don Rumsfeld until after the '06 election, immigration reform: These moves made the Bush White House's grasp of the times seem increasingly thumbless.

Even Bush's first-term gems tarnished rapidly. While much of the criticism was disingenuous, few can doubt the White House regrets that "mission accomplished" stunt. The Medicare prescription drug benefit may be surprisingly popular, but the promised political windfall never materialized. Meanwhile, Bush's two most important domestic accomplishments in the second term have been the appointments of John Roberts and Samuel Alito to the U.S. Supreme Court. But even these masterstrokes ran at least partly against the first instincts of Bush and Rove. If they'd had their druthers, Miers and Alberto Gonzales would be on the court today - a calamity from which neither the republic nor the Republican Party would soon have recovered.

There's a lesson for conservatives: Rove engineered Bush's 2000 victory by having Bush promise to be a "compassionate conservative." That meant generally staying mute on racial issues, luring Latinos into the GOP fold by any means necessary and advocating federal activism on everything from single motherhood to education. The story is complex, of course. Bush won tax cuts and was stronger on defense than Gore or Kerry would have been. But the central point remains: Rove's strategic vision involved securing a Republican victory at the expense of conservative principles.

Partisan victories are nice, but they aren't an end in themselves. Harry Truman, whom Rove and others see as a role model for Bush, liked to quote Napoleon on his fateful encounter with the Russians: "I beat them in every battle, but it does not get me anywhere."

Compassionate conservatism succeeded as a political tactic by co-opting liberal assumptions in much the same way that Bill Clinton's triangulation stole conservative thunder. Rove was, famously, the architect of this strategy, and as such the left hated him not for his ideas but for his successes, which they now want to emulate at all costs. The net-root "fighting Dems" who care about partisan victory above all else are in many respects the children of Karl Rove.