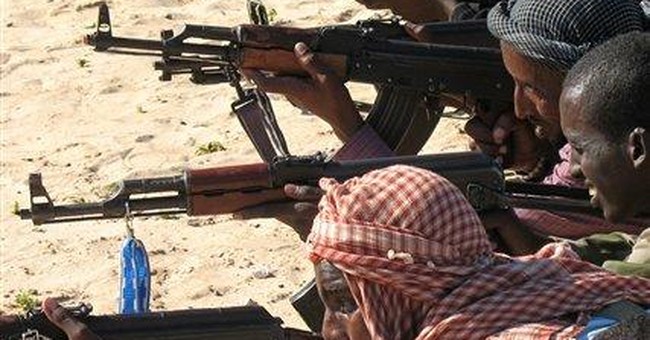 Bank robbers rarely use suicide bombers. Forgers don't declare war on capitalism, democracy and modernity. Kidnappers rarely behead their victims without asking for a ransom. And when they do ask for ransoms, only rarely do they demand infidels submit to the will of Allah instead of asking for unmarked bills.

These incandescently obvious observations illuminate, in a small way, the resplendent stupidity of the notion that we should treat members of al-Qaida like run-of-the-mill criminals.

Of course, al-Qaida's aims are also political. Sheikh Abdullah Azzam, one of the founders of the jihadist movement that became al-Qaida, put it this way (I'm quoting from Lawrence Wright's definitive history, "The Looming Tower"): "We shall continue the Jihad no matter how long the way, until the last breath and the last beat of the pulse - or until we see the Islamic state established." And remember, Azzam was humble in his aspiration. He wasn't after the global caliphate sought by many Islamists. He merely wanted the entire Middle East, the former southern republics of the Soviet Union, Bosnia, the Philippines, Kashmir, central Asia, Somalia, Eritrea and Spain.

Whether you call them terrorists, Mujahideen or a radical faction of Up With People, the simple fact is that what commonly goes by the label "Islamic terrorism" is not a merely a criminal enterprise. The profit motive didn't bring down the World Trade Center.

I know this is obvious to many. But it clearly isn't obvious to everyone.

For the nearly six years since 9/11, conservatives have complained that liberals see the war on terror as a law enforcement problem, not a military or strategic one. Liberals often respond by calling this a straw-man argument employed to make Democrats seem weak on national defense.

And yet, every time you look away for a second, leading liberals and Democrats play to type. During a June hearing of the House Judiciary Committee, Rep. Jerry Nadler, whose district includes ground zero, argued that members of al-Qaida were no different than any other criminals. When a witness objected that this would mean "if we had captured Mohamed Atta on September 10th, we would have had no choice but to treat him as a criminal defendant," Nadler responded, "That's exactly right."

This week, retired Gen. Wesley Clark and UCLA law professor Kal Raustiala penned what might be the least persuasive op-ed of the new millennium in The New York Times. Clark and Raustiala argue that we shouldn't treat members of al-Qaida as enemy combatants because such a designation is too high a compliment. "Labeling its members as combatants elevates its cause and gives al-Qaida an undeserved status," they argue. Therefore, they conclude, "the more appropriate designation for terrorists is not Œunlawful combatant' but the one long used by the United States: criminal."

They do not address the fact that under our system of law, "criminal" is the most advantageous designation a terrorist can get. It comes with all sorts of rights and rules terrorists can exploit: Miranda, speedy trials, the right to see classified evidence, the benefit of a reasonable doubt, the right to remain silent, etc.

We did not designate al-Qaida "enemy combatants" to elevate their status but to lower it. Under current treaty obligations, if we viewed al-Qaida as actual soldiers, they would be entitled to the protections of the Geneva Conventions even though they reject those conventions themselves. And if we treated them like criminals under American law, we'd have to launch "CSI: Kabul," collecting evidence for every "arrest." Clark and Raustilia say al-Qaida terrorists are more like pirates. But last I checked, Blackbeard wasn't interested in imposing a worldwide theocracy, and his henchmen weren't keen on blowing themselves up to achieve it.

If treating terrorists like any other criminals is such a good idea, why don't they recommend such an enlightened approach to Israel? After all, when Hezbollah rains down rockets on your cities, the sagacious response is to issue an arrest warrant and convene a grand jury.

We obviously need rules for dealing with people we capture, which is precisely what the Bush administration has been trying to establish. But saying that we should treat terrorists like criminals is to argue for doing less than nothing.