The First Order Of Business is....Order 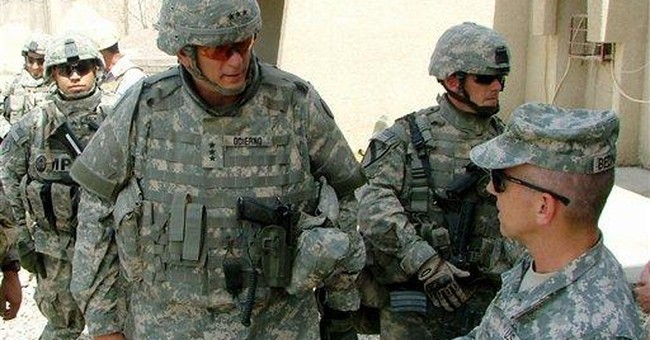 "My biggest hope for Iraq is that, when you find yourself in a courtroom in Iraq, it will be about what you did and not who you are," Sen. Lindsey Graham, R-S.C., said on PBS's "NewsHour" this week.

Well, it's about four years late but nonetheless encouraging to hear prominent supporters of the Iraq project (the phrase "Iraq war" really doesn't do the trick) getting their talking points right.

Americans are great at talking about how wonderful democracy is. The right to vote is taught as a sacrament from grade school up. Politicians can talk a mile a minute about how wonderful elections are for much the same reason salesmen at a Ford dealership can talk a blue streak about how great Fords are: It's their livelihood. Spend your career trolling for votes and you're apt to be able to explain why votes are the most important thing in the world.

But Americans don't believe, not really, that voting is the most important thing in the world. For starters, if they believed such nonsense, they'd vote more.

No, Americans like exercising plenty of other rights more than their right to vote. The right to speak your mind, own property, associate with whomever you like, be compensated for the fruits of your labor: these and other rights are plainly more dear to Americans than the right to pull a lever every two or four years. Obviously, Americans would care if anyone proposed taking away their right to vote. But as a matter of common sense, voting is less important to us than those rights and liberties that make our God-given right to pursue happiness possible. Ultimately, voting is a means to an end, not an end in itself.

Lest we forget, democracy shorn of these other rights is no less tyrannical than dictatorial rule. "An elective despotism was not the government we fought for," Thomas Jefferson wrote in "Notes on the State of Virginia." He recognized that parliaments and congresses do not a free country make: "173 despots would surely be as oppressive as one. Let those who doubt it turn their eyes on the republic of Venice."

In one sense, I don't blame the Bush administration for making elections in Iraq an early priority. There really is no universally recognized symbol of liberation from tyranny other than free elections. And I celebrated alongside everyone else at the sight of those purple thumbs. But without the foundations of a liberal order - rule of law, fair courts, property rights, relatively uncorrupt civil service - democratic elections are an exercise in futility. Indeed, they're terrifying to minorities like the Sunnis because they seemed a harbinger of oppression at the hands of the long-oppressed Shiites.

When looting beset Baghdad in 2003, then-Secretary of Defense Don Rumsfeld shrugged "freedom is untidy," as if rioting is part and parcel of democracy (a view shared by some on the hard left in America, by the way). That was the height of nonsense and sent exactly the wrong message. Rioting and looting scares those democracy needs most: the hard-working entrepreneurial middle class. Historically, democracy arrives when the bourgeoisie gets big and strong enough to demand honest government. The very poor often like demagogues (just look at Fidel Castro and Hugo Chavez), and the very rich don't care much about fighting against corruption or for accountable government because in unfree societies they tend to profit from both.

It's the small businessman, the shopkeeper or tradesman, who wants to feel secure in his property and contracts. He wants to know, as Lindsey Graham says, that he can get a fair shake from a judge. If, down the road, he gets to vote for his preferred politician, that's wonderful. But it's not the first priority.

In Iraq, security isn't merely the most important thing, it's the only thing. Without security, nothing else is possible. "The good society is marked by a high degree of order, justice and freedom," Russell Kirk wrote in The Roots of American Order. "Among these, order has primacy: For justice cannot be enforced until a tolerable civil social order is attained, nor can freedom be anything better than violence until order gives us laws."

Which is why Democratic talk about how "political solutions" are more necessary than military ones and President Bush's ornate rhetoric about the "universality of freedom" are so irrelevant, even counterproductive. The Arab world doesn't have a great grasp of what democracy is, but it does have a keen sense of justice and order. One significant reason we're having such trouble selling Iraqis on the former is that they were really in the market for the latter.