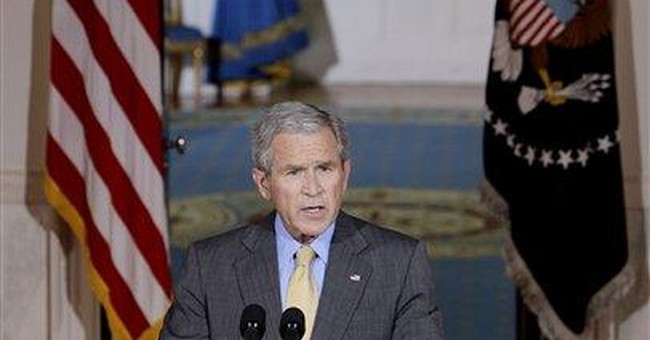 At a candidate forum for trial lawyers in Chicago on Sunday, Hillary Clinton proclaimed that the Bush administration is "the most radical presidency we have ever had."

This is, quite simply, absurd. But such boob-bait for the Bush bashers is common today in Democratic circles, just as similar right-wing rhetoric about Bill Clinton was par for the course a decade ago. The culture war, it seems, has distorted how we view politics more than we realized. Trust in government is at historic lows, but faith in one's own "team" remains remarkably durable. (President Bush's job-approval rating among Republicans is 80 percent, according to the polling company Rasmussen.)

Only someone suffering partisan amnesia could believe Bush has been a more "radical" president than, say, Woodrow Wilson, under whom antiwar dissidents were thrown in jail and beaten in the streets. Wilson was the first president to openly deride the Constitution, mocking the "Fourth of July sentiments" of those who cared too much about its meaning. Where Bush reaches out to American Muslims and illegal immigrants, Wilson demonized immigrants and "hyphenated Americans" with a venom unimaginable today. "I cannot say too often - any man who carries a hyphen about with him carries a dagger that he is ready to plunge into the vitals of this republic," Wilson said in 1919.

For much of the 20th century, American conservatives saw themselves as opponents of the imperial presidency, as embodied by Wilson and, later, FDR. In 1964, for instance, Barry Goldwater cast himself as the candidate against strongman government (and, revealingly, lost badly). But conservatives began to change their tune when the New Deal/Great Society consensus started to unravel and they discovered that the presidency could be theirs if they made peace with it.

In fact, some conservatives viewed Richard Nixon's downfall as the product of an unfair double standard because Democratic presidents had gotten away with metaphorical murder for years. Liberals who traditionally had seen nothing wrong with strongman presidencies (liberal-hero journalist Walter Lippmann urged FDR to assume "dictatorial powers") changed their tune under Nixon as well.

"Those who tried to warn us back at the beginning of the New Deal of the dangers of one-man rule that lay ahead on the path we were taking toward strong, centralized government may not have been so wrong," then-California Sen. Alan Cranston conceded at the height of Watergate in 1973.

"Congress has been a big part of the problem," declared Cheney, a veteran of the Ford administration. "A fundamental problem has been the extent to which we have restrained presidential authority over the last several years. ... We have been concerned with the so-called myth of the imperial presidency.

"We must restore some balance" between Congress and the White House, Cheney insisted.

Gingrich vehemently disagreed. "What we need is a stronger Congress, not a weaker Congress," he shot back. "The greatest danger of the Reagan administration is that conservatives will decide they can trust imperial presidents as long as they are right-wing when they are imperial."

I'd be curious to know if Gingrich still feels that way, now that his hungry eyes seem focused on the presidency. But the Newt of 1980 was definitely on to something. Today, most people object to the imperial presidency only when the other party controls the White House.

For eight years, the right screamed bloody murder about Clinton's overreaching. He minted new executive privileges, "accidentally" rummaged through the FBI files of political opponents and sought electronic wiretapping powers - during peacetime - that today are denounced. Some on the right feared we were on a slippery slope to tyranny. Liberals often chortled about such right-wing paranoia.

Today, the dynamic is reversed. Liberals fret over creeping fascism while conservatives give Bush the benefit of the doubt. Both sides are open to charges of hypocrisy, and neither is immune to partisan amnesia. The only consistent crowd are the Libertarians, who distrust all government power.

I wish I had some solution to offer, but my guess is there is none. Indeed, you can be sure that if Hillary Clinton is elected president, someone will denounce her as "the most radical president we've ever had" - whether it's true or not.