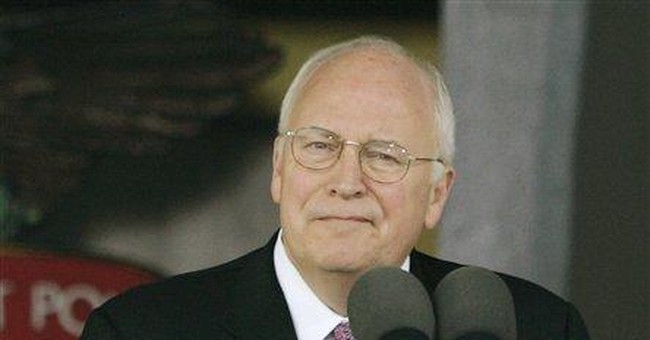 I'm a longtime member of a pretty select group: the Dick Cheney Fan Club. Chapters gather in phone booths, refrigerator boxes and, at the annual convention, we take up three whole booths in the back of a nearby Arby's.

Why do I like Dick Cheney? Because at a time when everybody talks a big game about how they don't like people-pleasing politicians who live by the polls, Cheney is pretty much the only guy out there who walks the walk. He truly doesn't care what people think about him. I love that.

In particular, I like his stance toward the media. His view of the Fourth Estate is a bit like that of a bull elephant annoyed by varmints shnuffling around his feet: He's not bothered enough to squish 'em ... yet.

But although I like Cheney's style - particularly in contrast to his boss's - it's become clear that the Cheney method leaves a lot to be desired. He may be more popular than Senate Majority Leader Harry Reid, but that's like saying, "This head cheese is tastier than carpet mold."

Moreover, Cheney's approach to government is ultimately counterproductive. That's certainly the upshot of an epic exegesis on Cheney's tenure that is unfolding like daily Pulitzer bait in the Washington Post this week. So far, the image of the VPOTUS emerging in the series is one of almost cinematic villainy. Like Cancer Man in "The X-Files," he always seems to be standing in the shadows, moving the gears of government to his own nefarious tune. According to the Post, he even intimidated former Attorney General John Ashcroft - who, we all know, smells of sulfur and eats puppies like popcorn - into abandoning his objections to harsh treatment of enemy combatants.

The vice president is famously concerned with two things: restoring the prerogatives of the executive branch, lost in the wake of the Vietnam War and Watergate, and defeating our enemies in the war on terror. Both are admirable goals. But seemingly countless sources inside the Bush administration tell the Post that Cheney has a contempt for bureaucratic and legislative consensus-building that rivals his contempt for cultivating public support through the media. As a result, he often succeeds in bulldozing policies - on enemy interrogations, etc. - all the way to the president's desk. But he's isolated when it comes time to defend these policies in Congress and the public.

Take the current argument over Cheney's self-exemption from the rules on how classified documents should be handled. Instead of getting a waiver from the president, Cheney argued that he's immune to executive orders because he's also the president of the Senate and hence a member of the legislative branch too. Not only is this a goofy argument on its face, it does nothing to restore executive authority. It's not like the vice presidency was an outpost of the legislative branch before Watergate. Cheney's argument amounts to a convenient rationalization for his own secretive style.

Such opportunism undermines his more principled arguments and exhausts the goodwill of his defenders, precisely when Cheney needs that goodwill for bigger and better things. And it sends his detractors on the left around the bend, just like President Clinton's abuses - real and perceived - drove many of us on the right to kick our TV sets. The fact is that Cheney's cause isn't helped when millions of Americans think he's a comic-book villain.

A big part of Cheney's appeal in 2000 was that he was the first VP in memory without presidential ambitions. Cheney was going to be a managerial veep, bringing lessons from the private sector and his stint as secretary of defense to the job. That sounded good (and attendance at Cheney Fan Club meetings was high back then). But it turns out there's a benefit to politicians behaving like politicians. If Cheney had been planning his own presidential run, he would have cared more not only about public opinion but about the political relationships he'd need in the future - the same relationships this White House needs now.

"The irony with the Cheney crowd pushing the envelope on presidential power is that the president has now ended up with lesser powers than he would have had if they had made less extravagant monarchical claims," Bruce Fein, an associate deputy attorney general under President Reagan, told the Post.

There's the rub of democratic government. Sure, the act of building consensus often requires sacrificing on your most preferred policies. But such consensus-building actually persuades the public, the bureaucracy and legislators of the necessity to act and reduces the chances they'll turn their back on the whole effort. The Cheney method instead creates a blowback that hobbles your efforts in the long run far more than compromise does.