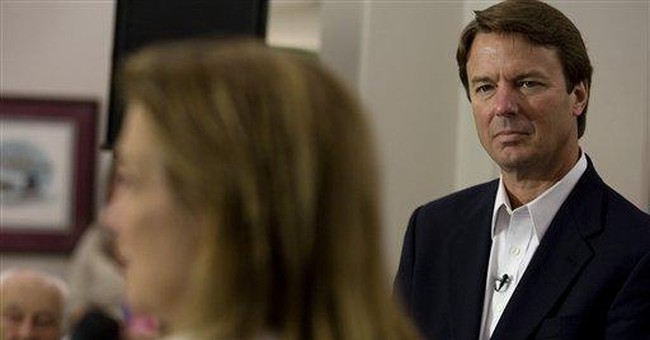 Last week, we learned that Edwards received $55,000 to give a speech, "Poverty, the Great Moral Issue Facing America," at the University of California, Davis. The poor students who attended were charged more than $17 a ticket. Earlier this month, it was reported that despite the fact he denounces predatory lending and subprime mortgages for the poor, Edwards made nearly $500,000 as a consultant to a hedge fund involved in that business.

The former senator defended his gig on the grounds that he took the job to learn how financial markets relate to poverty. This is a bit like saying you frequent brothels so you can learn where babies come from. But here's the hilarious part: Edwards said he didn't know the fund was involved in subprime lending. If he was there to learn about poverty and finance, how did he miss this salient fact? He must be a slow learner. No wonder his former political consultant, Bob Shrum, calls him "a Clinton who hadn't read the books."

Business Week magazine reports that Edwards launched a poverty center that conveniently worked out of the same office as his political action committee. The nonprofit center spent a staggering 70 percent of the money it raised on a speaking tour for Edwards and on salaries for staffers who in short order just happened to join his presidential campaign. This gives new meaning to the term "poverty pimp."

A few years ago, when it was reported that "virtuecrat" Bill Bennett, the former secretary of education, liked to gamble in Las Vegas, columnist Michael Kinsley spoke for much of establishment liberalism when he declared, "Bennett has been exposed as a humbug artist who ought to be pelted off the public stage." I thought this was unfair, as Bennett never inveighed against gambling, nor did his church consider it a sin. But certainly Edwards, who gets choked up and misty-eyed from his own relentlessly recounted stump speech about "two Americas," is more of a humbug artist than Bennett ever was. You would think that when Edwards looks in the mirror in one of his new, 28,000-square-foot house's six bathrooms, inspecting whether it's time for another $400 haircut, he might feel the slightest twinge of conscience about his us-versus-them shtick.

Now, of course, this doesn't mean that he doesn't care about poverty, and there's certainly nothing wrong with making money. He launched his fortune as an ambulance-chasing lawyer, after all, so he's good at convincing people, starting with himself, that he's on the side of the angels. But the story he tells to prove he's not a hypocrite is typically phony. For example, his 2004 presidential campaign highlighted the humble little house he led people to believe he grew up in. But the small home touted in commercials was Edwards' residence until he reached the ripe old age of 1. Then, his father the mill worker was promoted to management and the family moved into a more expensive home that never appeared in his campaign ads.

It's not that Edwards is a liar, it's that he's a toothy door-to-door salesman, seemingly hawking the issues when he's really just hawking himself.

When Edwards was preparing for his first run for president, he struck the pose of a Southern moderate. The National Journal noted that his voting record set him "comfortably apart from Senate liberals." Now that he's out of office - it's doubtful that he could have won reelection - he's recast himself as the election season's premier anti-warrior. Last week, Edwards gave a major foreign policy speech in which he ridiculed the very idea of a "war on terror" as nothing more than a "bumper sticker slogan." Of course, until recently, he had no problem with the concept. As Sen. John Kerry's running mate, he campaigned on the claim that Iraq was distracting us from the real war on terror. Before that, he recanted his vote in favor of the Iraq war.

In his new book, Shrum says that Edwards voted for the war not because the Bush administration misled him but because his spin doctors did. Edwards denies this, but even in the recent South Carolina Democratic debate, he confessed that the lesson he learned from his vote is that he needs "to put more faith in my own judgment."

That's a convenient position for a man who seems to really believe only in one thing: himself.