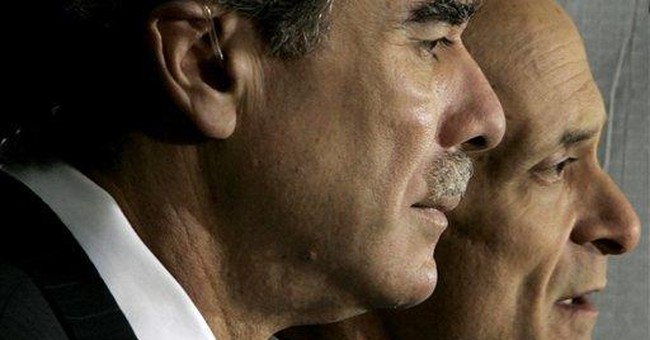 I got my start in Washington in the early 1990s as a researcher at the American Enterprise Institute working for Ben Wattenberg. A self-taught demographer, Ben also happened to be - and remains - one of America's foremost champions of liberal (others would say "lax") immigration policies.

Ben is a brilliant man with many lasting accomplishments to his credit. But one legacy has always grated at me, even as it has seeped into the conventional wisdom on certain parts of the right. One of Ben's favorite rhetorical flourishes is to compare America to a giant cocktail party. He makes the comparison often, and it's caught on among congressmen and think-tankers. It goes something like this:

"Imagine you are in a giant ballroom where 1,000 people are gathered for a Washington cocktail party," he'd say (I'm paraphrasing), "and into the room walk three Mexicans. Those three Mexicans represent the proportion of the U.S. population that immigrants add each year. There is little evidence these immigrants are spoiling the party."

While I agree with Ben on many things, I think it might be worthwhile, given the current debate over immigration, to explain why this analogy is so wrong.

First and most obviously: America simply isn't a cocktail party. And it probably doesn't help the cause to tell people in Peoria to lighten up by imagining themselves at a ballroom soiree in the nation's capital. Lots of taxpayers are already overly suspicious that folks in Washington are too blasé about things "normal Americans" care about. Saying don't worry and drink your champagne doesn't make it better.

At the cocktail party, the guests don't fear a few new arrivals will take their jobs, dampen their wages or overturn their communities. The reality is quite different.

The inherent math of the analogy is deeply flawed, too. It assumes a finite time period and a single input. To be accurate, the proportion of new arrivals needs to be cumulative. So if each year equals, say, 10 minutes at the cocktail party, within an hour you've got 18 mostly poor, non-English-speaking strangers. In three hours you've got 54.

Other variables are left by the wayside as well. Native-born Americans are older than immigrants. So over the course of the cocktail party, the oldsters would start dying. And, of course, people at cocktail parties don't typically have babies.

But the most important variable left out is that some unknowable percentage of the new arrivals are, in fact, party-crashers. And that's why the analogy really doesn't hold. If you had a cocktail party and every few minutes you saw people - poor, hungry, desperate people - sneaking into your party, you'd be concerned. As they bellied up to the buffet and availed themselves of your hospitality, you might ask security to find out what's going on.

No doubt most crashers would be well-intentioned and as polite as they knew how to be. Some might start offering to sell services, shine shoes, whatever, to make a few bucks. Many have harrowing stories about how they got to the party. But they simply weren't invited. Oh, and some very small but significant number of the crashers will be criminals or terrorists.

Now, I've been to my share of schnitzy Washington parties, and let me tell you, the response wouldn't be: "C'mon in, the more the merrier!"

For the record, I'm not anti-immigration. Indeed, by the standards of many of my colleagues at National Review, I'm something of a squish on the subject. But I have nothing but sympathy with the mainstream, well-intentioned objections to the immigration status quo.

The United States isn't some inside-the-Beltway moveable feast where revelers make a living by talking to each other as the prols cater to them. It's a specific place, rooted in specific soil and a specific - albeit open and boisterous - culture. But if we must compare America to a party, there's one immutable fact politicians and business interests ignore: It's our party. We - i.e., the American people - get to decide who is invited and who gets to stay. And the American people - or at least lots of them - no longer trust Washington to check for invitations at the door.

Personally, I favor some kind of tough "amnesty" where many of the existing illegal immigrants in the United States can achieve citizenship if they're willing to meet the obligations of it. I favor generous but smart legal-immigration policies, many of them found in the current Senate plan. But until Washington can be trusted to enforce a by-invitation-only policy, lots of us won't care whom they want to invite in the first place.