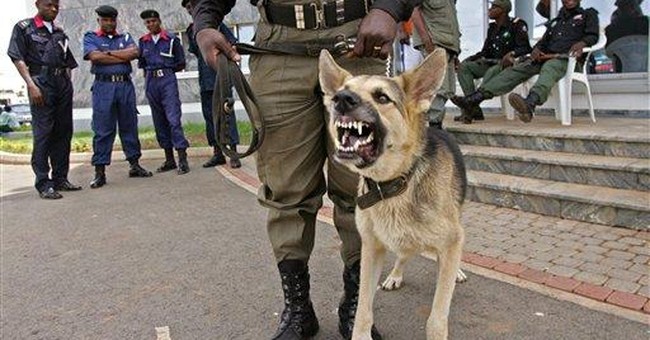 The Goldberg household is less cheerful than normal these days. Cosmo the Wonderdog recently had ACL (anterior cruciate ligament) surgery on one of his back knees. Last summer he had the same surgery on his other hind leg. When he was a 1-year-old he had surgery on a front leg because of an unrelated joint problem. Plus, there have been the usual accidents and mishaps normally associated with active canines.

Dog-owning readers with even remotely similar experience might be doing some quick mental calculations. And right about now they're concluding that I've spent enough money on Cosmo to buy a pretty good car.

But we don't complain about the money, at least not much, because we love our dog. A lot. Which is why his generally gloomy state has cast a pall over the entire house. Dog owners know what I mean. When your dog's not home, the house feels empty. And when he spends all day on his bed seemingly plotting revenge on his human overlords or mentally composing letters to Amnesty International about his mistreatment, it's impossible to escape the contagion of his funk - particularly when he has to wear that cone-shaped collar (which prevents him from nipping at his stitches). He looks up at me from the center of that plastic flower, saying with his eyes "this thing demeans us both."

I bring all of this up for several reasons, chief among them I want to be clear that I understand the desire to make our dogs - and, yes, I suppose cats too - happy.

But not all forms of happiness are the same. We spend this money on Cosmo so he can once again personify pure doggie goodness in the many good years he has left. Some people, on the other hand, want to spend money on their dogs to keep them from being doggy.

You may have heard that Eli Lilly, the maker of Prozac, has just launched Reconcile, a chewable, beef-flavored antidepressant. It's designed to lessen separation anxiety for dogs left alone for long periods of time. "A lot of people who have this problem with their pets will come home to a trashed house," a Lilly spokesman told the Associated Press.

I'm sympathetic to better living through chemistry, but isn't there something shameful to this?

Dogs are pack animals. The romance of lone wolves notwithstanding, most canines don't want to be alone. Cosmo is spoiled in this regard. My wife and I work from home, and he's rarely left alone for extended periods of time. (And when he is, he tends to surf the Web using my credit cards. Need an extra metric ton of tennis balls, only slightly chewed?)

For example, when I see city residents walking border collies - the Nietzschean ubermenschen of the canine world - on leashes, it drives me crazy. These dogs were designed through eugenic engineering to work their minds and bodies every day at enormously high levels, not get a few minutes' walk to Starbucks.

At first, I couldn't stand the cable TV show "The Dog Whisperer" because the host, Cesar Millan, uses New Agey mumbo jumbo about "energy" and "color" to explain himself. But after watching a few shows, you realize that Millan knows what he's doing, and to the extent he uses some silly buzz phrases, it's because he needs to explain to often clueless dog owners that - surprise! - dogs need to exercise. In almost every episode, at least one of the dogs is a mess because he's left alone all day and doesn't get out much.

Some breeders are finally catching up with reality and breeding dogs that make sense for modern urban living. Portuguese water dogs are great, but most condo owners don't need a dog to deliver messages between fishing boats. Of course, traditionalists object to the new crops of labradoodles (Labrador/poodles) and puggles (pug/beagles), but this is absurd. Most dog breeds were created to do jobs like rat-catching, herding and the like. There aren't enough openings for those jobs today. But there is still a lot of demand for the love of a good dog, so if we're going to have dog breeding at all (I'm very pro pound dog), why not breed to fit today's needs?

It sure beats the Brave New World of medicating dogs to keep them from being dogs.