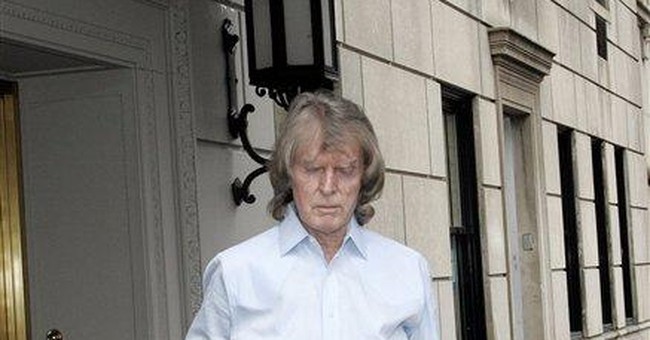 Everything worth saying about the Don Imus thing - which isn't much - has been said already. We've now moved beyond Imus to the "national dialogue" phase of this familiar cycle. This is where we're supposed to tackle hard questions and deep truths about our society.

People have been calling for national dialogues and conversations for decades. It usually works something like this: Liberals say we need a frank discussion about race (or class or gender) in this country, and then they proceed to bludgeon any conservative stupid enough to take them up on their offer.

Consider a recent non-Imus example: Newt Gingrich said last month that bilingual education keeps some people in the "ghetto." Within hours, the same "let's have a frank dialogue" crowd denounced the former House speaker, insisting that he apologize for being so frank. And Gingrich promptly complied.

That's how the political-correctness Kabuki theater works. There's a reason so many were quick to point out that Imus' "shocking" shtick is museum-lecture dull compared to what black rappers spew on a regular basis. Too often, political correctness is a fixed fight where white guys get beat up for things others are allowed. The selective enforcement of PC shibboleths undermines the credibility of liberal do-gooders. For example, when campus administrators turn a blind eye to goons burning conservative newspapers or shouting down right-wing speakers, it makes it hard to take them seriously when they bleat about free speech.

But don't get me wrong. For the right - not to mention the creators of "South Park" - political correctness can be the gift that keeps on giving. The earnest leftists of the academy who seriously use "herstory" for "history" or "ovular" instead of "seminar" make it easy to discredit the entire PC project as a lot of pretentious, even Orwellian, nonsense.

But pointing out these excesses has costs for conservatives, too. Standing up to political correctness has become an unlimited warrant to be rude for its own sake. And if you catch flak for it, you can just say you were defending free thought. Ann Coulter, for example, justifies her cruder barbs and insults on the grounds that she's pushing back against the liberal thought police. Sometimes she's even right. But calling John Edwards a "faggot" is hardly a triumph of conservative principle.

I'm all in favor of acid wit and barbed satire. But too many partisans on both sides sound like Beavis and Butt-Head, tittering over trivia. More important, if political correctness is as absurd as so many people think it is, why is it so successful? This newspaper, your local schools, police and fire departments, city hall, your church and workplace all likely subscribe to vast swaths of what was once called a politically correct agenda, from rules barring sexual harassment to the language you can use in casual conversation or e-mails. Surely if PC is the Orwellian imposition so many conservatives claim it is, Americans would reject it the way they resisted other alien impositions, such as the metric system, bidets or David Hasselhoff's Germanic personality cult.

The reality is that much of political correctness - the successful part - is a necessary attempt to redefine good manners in a sexually and racially integrated society. Good manners are simply those things you do to demonstrate respect to others and contribute to social decorum. Aren't conservatives the natural defenders of proper manners?

Remember that D.C. bureaucrat who lost his job for using the word "niggardly" correctly in a sentence? That was outrageous overkill, but I don't know that many well-mannered white people who would use "niggardly" in a room full of black people either, for fear of offending. The problem with political correctness resides in the demand that new manners be created from scratch, which is bound to turn people off. I mean, did we really need to replace "old" with "senior" or purge "Dutch treat" from the vernacular?

PC's problems become even more acute when the left insists on smuggling larger agendas into what should be a polite conversation about what constitutes politeness. There's remarkable overlap between conservative and liberal complaints about the culture. But when traditionalists talk the language of decency and morality, the left hears bigotry and theocracy. And when liberals talk about sensitivity and white privilege, the right hears something totalitarian. The result is that the two sides hold separate conversations. And when they do talk to each other, each side is listening for hidden agendas.

Perhaps the reason the national conversations always sputter out is that they start off too ambitious. Rather than tackling America's fundamental problems, we could start by talking about how we should talk.