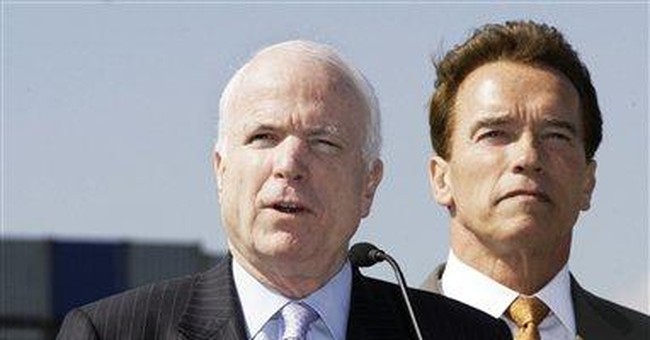 In 1960 Barry Goldwater, the patron saint of modern conservatism, gave some famous advice to conservative Republicans who were angry with their shabby treatment at the hands of the Nixonites. Get over it, Goldwater told them.

"Let's grow up, conservatives," Goldwater proclaimed. The embryonic conservative insurgency within the GOP couldn't let hard feelings get in the way of the hard work that needed to be done, AUH20 counseled.

Today's conservatives might be well-advised to take similar advice with regard to the successor to Goldwater's seat, Arizona Sen. John McCain.

In the eyes of his conservative detractors - among whom I've long counted myself - McCain has a maddening habit of proving his political independence by winning accolades from the New York Times editorial board. On campaign finance reform, global warming, opposition to tax cuts and other issues, the "maverick" has too often racked up points by scoring against his own team. Sometimes he stands to the right of the GOP, sometimes to the left, but always he seems to relish breaking ranks for its own sake.

It's an annoying habit, but conservatives should consider their other options. For example, by any measure, Rudy Giuliani is the more liberal candidate - indeed, the most liberal serious candidate Republicans have fielded in decades. But because Giuliani made the right enemies - chief among them those vexatious New York Times editors - conservatives respect him, even though they disagree with him on almost everything. Meanwhile, they give the cold shoulder to McCain, who agrees with them on most of the important things.

For instance, McCain's been a consistent pro-lifer (which distinguishes him from pretty much everyone else in the race so far). Until recently, Giuliani argued passionately for partial-birth abortion as a constitutional right. McCain has voted to confirm every conservative Supreme Court nominee, including Robert Bork. He voted "guilty" in Bill Clinton's impeachment trial. He campaigned for George W. Bush in 2000 and 2004, even after a bitter defeat at Bush's hands. Giuliani says he was ideologically simpatico with Clinton, and he endorsed Democrat Mario Cuomo for governor of New York.

My point isn't merely to make invidious comparisons between McCain and Giuliani (heck, to liberals they're not invidious at all). I'm actually a fan of Giuliani, and I think the GOP and the country could do worse in a president and Republican standard-bearer. But the double standard on the right seems more than a little self-indulgent.

Giuliani's chief selling point seems to be that he'll have "what it takes" to be tough in the war on terror. That may well be the case. But Giuliani's foreign policy experience is, at best, limited. Meanwhile, McCain's experience is deeper than the rest of the field's combined. There's no evidence that Giuliani is more of a hawk than McCain, who has spent the last four years arguing that Bush needs to be more aggressive in Iraq and who argued for a troop "surge" years before anyone used the word.

After 9/11, Giuliani earned his reputation for showing his sensitive side. After 9/11, McCain said to our enemies, "May God have mercy on you, because we won't." How can conservatives argue that Giuliani is The One because he's willing to be a tough SOB on the war on terror, while deriding McCain because he's been such an effective SOB to a president and party who, McCain believes, haven't been tough enough?

In response, McCain has decided to slap conservatives out of their haze. In what his campaign is billing as major speeches, the first on Wednesday at the Virginia Military Institute, McCain plans to make his candidacy a referendum on victory in Iraq. It is a truly bold and courageous gambit. At a time when the polls advise running away from the war, McCain will embrace it.

By positioning himself to the hawkish right of the Bush administration, McCain might be able to make the election a referendum on the future of Iraq, rather than a referendum on the last four years. As a war hero with two sons in the military, McCain can argue with obvious moral authority that while we may have blundered our way into Iraq, it would be an even greater blunder to get out before winning.

There are many reasons to have reservations about McCain: his love of regulation, his animosity toward free-marketers or simply his age and temper. But conservatives who claim that the war trumps everything but won't even consider pulling the lever for McCain have some growing up to do.