Under the Gun, Liberals give Ground on Second Amendment 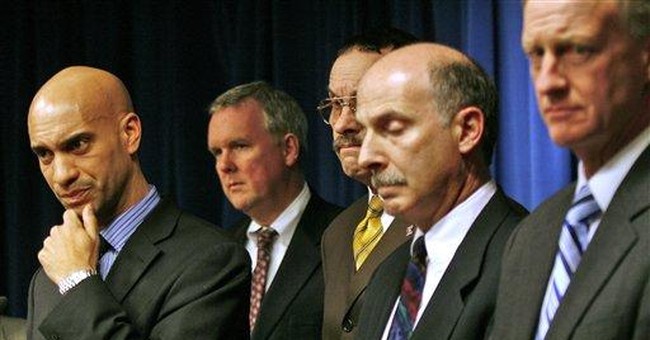 Considering how badly things have been going for conservatives, right-wingers, Republicans and anyone else whose brain doesn't explode like one of those guys from the movie "Scanners" at the thought of another Republican president, it's worth noting that one of the greatest conservative victories of the last 40 years is quietly unfolding right in front of us. On March 9, the U.S. Court of Appeals for the District of Columbia Circuit issued an epochal ruling. The court found that the Second Amendment actually protects the right to bear arms for individuals.

Now, that in and of itself is huge. For decades, the courts, the legal and academic establishments, the press and all right-thinking people everywhere have been arguing that not only is the Second Amendment a chestnut from a bygone age, but that enlightened judges should just go ahead and void the darn thing like a bad parking ticket.

The high-water mark of anti-gun-rights shabbiness was the 2000 release of "Arming America" by then-Emory University historian Michael Bellesiles. The book purported to prove that gun ownership was never a major part of American society and that America's gun culture was a useful myth for the gun-nutters eager to make the Second Amendment mean something it doesn't. The book received lavish praise from the liberal establishment, including a rave review by Gary Wills in The New York Times, and won Columbia University's prestigious Bancroft Prize.

The only problem was that the whole thing was an elaborate hoax, perpetrated with faked or nonexistent evidence. Intellectually honest liberals had to recant. The Bancroft Prize was revoked. Wills admitted: "I was took. The book is a fraud."

Of course, there has always been a minority of liberals who've shown a willingness to admit, often reluctantly, that the Constitution can approve of something they disapprove of. Liberal journalist Michael Kinsley famously quoted a colleague as saying, "If liberals interpreted the Second Amendment the way they interpret the rest of the Bill of Rights, there would be law professors arguing that gun ownership is mandatory." And in 1989, Sanford Levinson penned a Yale Law Review article tellingly titled "The Embarrassing Second Amendment."

Such honesty has proved contagious. As Brookings Institution scholar Benjamin Wittes chronicles in the current edition of The New Republic, various liberal legal scholars have come to grudgingly accept that the Second Amendment's meaning and intent include the individual right to own a gun. "(T)he amendment achieves its central purpose by assuring that the federal government may not disarm individual citizens without some unusually strong justification," writes no less than the dean of liberal legal scholars, Laurence Tribe. Tribe had to update his textbook on the Constitution to account for the growing consensus that - horror! - Americans do have a constitutional right to own a gun. It's not an absolute right, of course. But no right is.

Now, you might think this is what I have in mind when I say that the Court of Appeals ruling was an epochal victory for conservatives. But it's not.

No, the real victory is that liberals are starting to accept the fact that the constitution has a meaning separate and distinct from what the most pliant liberal judge wants it to mean. Therefore, writes Wittes, "perhaps it's time for gun-control supporters to come to grips with the fact that the (Second Amendment) actually means something ... For which reason, I hereby advance a modest proposal: Let's repeal the damn thing." Wittes isn't alone. A number of left-wing commentators have picked up the idea as well.

Personally, I would oppose repeal, and I have problems with many liberal arguments against the Second Amendment. But that liberals are willing to play by the rules is an enormous, monumental victory that transcends the particulars of the gun-control debate.

According to the so-called "living Constitution" championed by liberals from Woodrow Wilson to Al Gore and Bill Clinton, amendments are a waste of time since enlightened jurists can simply "breathe new life" into the meaning of the Constitution. No more, if Wittes and Co. have their way. Now, we'll have to have an argument.

"It's true that repealing the Second Amendment is politically impossible right now," Wittes concedes. "That doesn't bother me. It should be hard to take away a fundamental right."

Yes, it should. It should also be hard to mint a new one. And, as conservatives have argued for decades, in both cases the ideal method is democratic debate and legislative deliberation, not judicial whim. So buck up, my conservative brethren. It's not all bad news these days.

Video: Biden’s Handlers Usher Reporters Away Like Cattle as He Tries to Answer Questions, Even CNN Notices
Redstate
Two retired military officers: Mark Milley must remove Trump in January if he loses and refuses to leave
Hotair