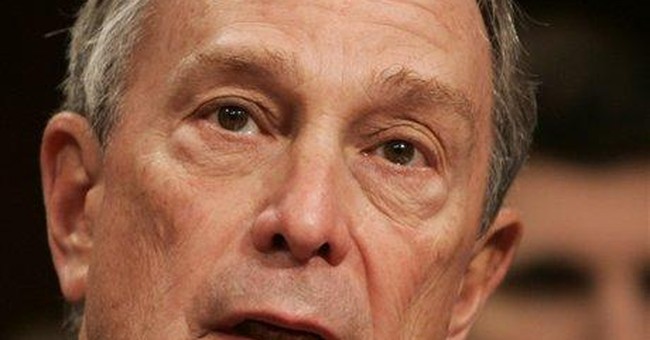 Billionaire Michael Bloomberg reportedly tells friends that his idea of good financial planning is to have his check to the undertaker bounce. "So," asks the Washington Post, "how does a billionaire spend all his money before he dies?" Well, "he just might drop a cool half-billion on a long-shot bid to become the nation's first modern president from outside the two major political parties."

Now, if you're the sort of person who thinks Bloomberg, the mayor of New York, is the man to save America, this column's probably not for you. So, the seven or eight of you who feel this way are excused from reading further. For the rest of us, the pressing question is, "What hath we wrought?"

Ten years ago, as veteran campaign finance reformer Mark Schmitt notes in the current issue of Democracy, the modern campaign finance movement was born. It was in 1996 that the nation witnessed its first billion-dollar election - when all of the federal races combined exceeded $1 billion in expenditures. It was also the year when Bill Clinton seemed to have rented out the White House to big donors and shady Chinese characters.

The next election probably won't need Chinese subtitles, but it's likely that $1 billion will be spent on the presidential campaign alone.

I have no objection to price inflation in political campaigns per se. More money means more communication, more debate, more education. In other words, more democracy.

When people say that politics has become too expensive, the correct response is "compared to what?" Americans spend between $200 billion and $300 billion on Christmas presents, $36 billion on their pets, $10 billion on pornography and more than $1 billion on toy action figures and accessories.

So a billion bucks on the next commander in chief may not be so crazy - assuming that more expensive means better quality.

What offends me is the primary reason for the inflation: campaign finance "reform." The Bipartisan Campaign Reform Act, a.k.a. the McCain-Feingold law, passed in 2002, was supposed to improve the system by regulating the amount of money going into, and coming out of, politics. Campaigns could no longer belly up to big donors and instead had to go to thousands of smaller contributors. Nor could supporters write large checks (soft money) to the political party of their choice, but they could instead give money to third-party "527 groups" unregulated by campaigns or parties.

The reformers' thinking goes something like this, Schmitt writes: "Money is a bad thing that should be kept out of politics. ŒBig money' is worse. ŒPrivate money' is bad, Œpublic money' is good. Instead of asking, ŒHow can we encourage the kind of things we think are healthy for democracy?' ... They see the money move to another stream, and they try to dam that stream, then the next and the next."

This sort of thinking is guaranteed to lead to disappointment. Campaign finance reform doesn't keep money out of politics, as the price inflation demonstrates. It merely skews the market, making it harder for rookies and amateurs to get in and easier for the pros and incumbents to game the system.

It's a lot like government tuition aid. Intended to keep costs low, these programs have driven tuitions skyward. The richest kids can afford college without government help or big loans (and they can afford to pay for tutors in order to get into their preferred school), but few others can.

Similarly, the richest candidates or the candidates with the biggest war chests - surprise! they tend to be officeholders - love campaign finance reform because it burdens the competition. New Jersey Gov. Jon Corzine, a Democrat, largely bought his U.S. Senate seat with $68 million of his own money and his governorship with $43 million. In 2000, George W. Bush opted out of public funding for the primaries. He did it again in 2004, and John Kerry did, too. Seeing that the system holds back the suckers, Hillary Clinton has announced she's ditching public funding entirely. If Bloomberg runs, he might not even try to raise money.

"Campaign contributions from a single source that run to the hundreds of thousands or millions of dollars are not healthy to a democracy," Sen. John McCain declared in 2001. "Is that not self-evident?"

Well, it's about as self-evident as the notion that having a candidate give himself $500 million to run for president is healthy for democracy. Which is where "reform" has gotten us.

Bloomberg fans might say: "Hey, it's a free country, why shouldn't he be able to blow his money on politics if he wants?" The answer is: He should be. The questions in response should be: Why aren't non-billionaires allowed to do the same thing? And: Why is it only OK when you're making donations to yourself?