Betraying their base - Democrats can do it too 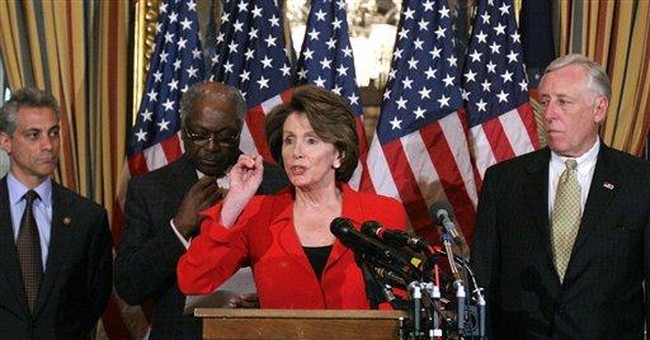 It's ironic. Republicans by most accounts got trounced in the last election because they "lost their way." The latest cover of Time magazine even has a picture of Ronald Reagan crying like that American Indian from the old anti-pollution ads of the 1970s. Instead of roadside litter, the Gipper is supposedly looking at the GOP's mess.

How did Republicans lose their way? The cliches runneth over. They grew comfortable in power. They forgot why they were sent to Washington. They became addicted to spending. They lost touch with their constituents, their principles, their souls.

Just because such statements are cliches doesn't mean they're not true. Indeed, you hear these complaints from the conservative base more than from anywhere else. The GOP grew sweaty and bloated like a fat man at an all-you-can-eat pasta bar, and voters were right to pry the Republicans' white-knuckled grip from the hot table's sneeze guard.

So here's the ironic part. Suddenly, it looks as if the Democrats are the Republicans on fast-forward. It's early yet, and the Democrats did finish their mini-Contract with America - the so-called first 100 hours - with mixed success on the substance but great fanfare in the media. Yet items like upping the minimum wage and shafting oil companies, although certainly not insubstantial, were primarily symbolic.

The most important issue in the November elections was the war in Iraq. The weasel words and euphemisms - "strategic redeployment," "course change," whatever - couldn't conceal the simple fact that the Democrats were elected largely to end the war. That was certainly how the party's liberal base saw it, then and now.

But look at how the Democrats are behaving. They've completely failed to stop the surge, and their latest efforts to derail the war are so convoluted - timetables on top of timetables - that even House Speaker Nancy Pelosi and House Appropriations Committee Chairman David Obey, a co-sponsor of legislation to withdraw troops by September 2008, can't explain them.

CNN's John Roberts played a clip on "Late Edition" from a news briefing in which Obey muddled nearly every detail of the Democrats' plan. Roberts then asked Sen. Joe Biden, "How do you pass or enforce something you can't even explain?" It's a good question.

But the answer may not matter because House Democrats have decided to lard the supplemental appropriations bill with billions in pork to sell their troop-withdrawal gimmicks. "Included in the legislation," reported the Washington Post, "is a lot of money to help win support. The price tag exceeds the president's war request by $24 billion ..." That number includes giveaways for spinach farmers and money for peanut storage. Back when Democrats were in the minority, they would have denounced this as piggybacking pork on the troops.

When Obey was confronted by antiwar activists, they demanded to know why it was taking so long to end the war. He responded that "idiot liberals" need to understand the complexities of legislating. That doesn't sound arrogant and out of touch at all.

Forget the war for a minute. What's the second most important issue for liberals today? Global warming, of course. For example, Sen. John Kerry claims that he's not running for president in'08 so that he can dedicate himself to the issues of Iraq and climate change. John Edwards says global warming will make world war look like heaven. Hollywood donors who hate the prospect of sweating in greenhouse gases as they walk to the gangway of their private jets think that global warming is the defining issue of our age.

So now's the time to solve global warming, right? For years, we've been subjected to charges that President Bush "refused to sign the Kyoto Protocol." Well, guess what? Bush couldn't sign Kyoto. It was already signed under the previous president, who immediately shoved it in his desk drawer. (Bush didn't sign the Treaty of Versailles either, by the way.)

If Kyoto's such a priority, why hasn't Senate Majority Leader Harry Reid fought to take it up? There's a strong legal case that once signed, a treaty is automatically in the Senate's court. But you don't hear Reid fighting to take up Kyoto even though it's our best hope to combat the Most Dangerous Threat Facing Mankind.

Of course, Kyoto would never pass even a Democrat-controlled Senate because it would wreak havoc on the economy. Other Democratic betrayals in the making face similar problems. Democrats could never repeal the Defense of Marriage Act or the military's "don't ask, don't tell" policy. But that's the ironic part. Republicans went soft because doing what the base wanted was too damn hard. It seems the same fate awaits Democrats.