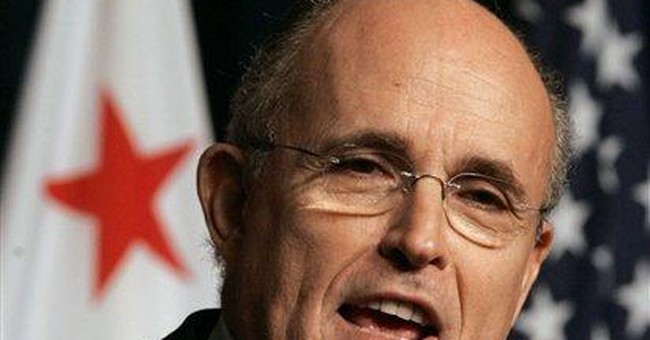 Maybe I'm remembering this wrong. But I could have sworn we spent the last seven years talking about how the Republican Party is the party of backward red states - where hate is a family value, fluffy animals are shot, and God is everyone's co-pilot - and how the Democratic Party is the avant-garde of the peace-loving, Europe-copycatting blue states, where Christianity is a troubling "lifestyle choice," animals are for hugging, and hate is never, ever a family value.

Admittedly, over time the red state-blue state thing was eclipsed by other cliches about how the GOP had been hijacked by "theocrats" or by K Street corporate lickspittles, warmongers, immigrant-haters, hurricane-ignoring nincompoops and, for a moment during the Mark Foley scandal, cybersex offenders. I can dredge up all the relevant quotes, but if you've been paying attention, I shouldn't have to.

In 2006, the Democrats took advantage of these accumulated perceptions, as they should have, and charged back into power in both the House and the Senate.

So now the GOP is in the minority, and for the first time in 80 years, the White House doesn't have a candidate of any kind in the presidential race. And so the Republican Party gets to pick its next standard-bearer from scratch.

Here's the interesting bit: The GOP rank and file is steadfastly refusing to play to type.

The front-runner in most polls is Rudy Giuliani, a pro-choice, anti-gun, immigration-expansionist former mayor of the capital of Blue America, New York City. Just last weekend, Giuliani finished a close second in the CPAC straw poll of conservative activists (and first if you add the activists' first-choice and second-choice ballots).

Giuliani has, with only a few minor exceptions, refused to pander to the conservative base of the Republican Party, and yet he's the man to beat. It's early, and a lot of GOP voters don't know his record. But this is still hard to reconcile with the standard image of Republican voters. When George W. Bush beat Al Gore in 2000, for example, the late Boston Globe columnist David Nyhan wrote that all those "angry white males" could claim victory and "go back to their day jobs - oiling their Smith & Wessons, hectoring pregnant girls scurrying into abortion clinics, jeering at welfare mothers."

Giuliani's main competitors hardly come out of central casting either. Mitt Romney was the governor of ocean-blue Massachusetts, and he won the CPAC straw poll (with the help of bused-in volunteers). Romney is trying to position himself as the candidate of the conservative base, pandering to conservative audiences like an infomercial host who needs to unload the rest of his George Foreman grills before the top of the hour. Interestingly, such pandering isn't translating into high poll numbers.

Technically, Sen. John McCain is from a red state, but Arizona is usually touted as part of the most fertile new territory for Democrats, the so-called "Libertarian West." Moreover, through most of the Bush years, McCain was hailed by the press, Democrats and many Republicans as a moderate, even a liberal. In 2002, liberal magazines The New Republic and Washington Monthly touted McCain for the Democratic nomination for the 2004 race.

What's going on here? Well, several things. The first is that the press - shockingly! - got the story wrong. The media's GOP-phobia has always been driven by the conviction that Republicans are exotic and different. The New York Times, for example, covers the "conservative beat" - defined as churchgoers, gun nuts and other denizens of flyover country - but the "liberal beat" would be an oxymoron for the Times because that includes everything else.

During the 2004 Republican National Convention, the press caterwauled about how the RNC used moderates such as McCain, Giuliani and Arnold Schwarzenegger to mask its true nature. What the media missed was that all three are immensely popular among Republicans.

The press and the Democrats love to pull out figures such as Pat Robertson, like a Medusa's head from a sack, to petrify mainstream voters (witness the Groundhog Day feel of the latest Ann Coulter controversy). And yet, despite all of the scaremongering, there's a reason why the last 30 years have been marked by the GOP ascendancy. America's a center-right country, and were it not for a string of recent errors, the GOP would still be the natural majority party.

Lastly, perhaps the GOP is self-correcting. The exaggerations notwithstanding, perhaps the rank and file is reining in the party establishment. The Republican Party is undergoing a seismic shift, prioritizing foreign policy in ways not seen since the height of the Cold War. In response, the usual rules are being rewritten.

Or maybe it's just too soon and this is all about name recognition. But whatever the real story is, you can be sure that won't be the story line you hear from the press.