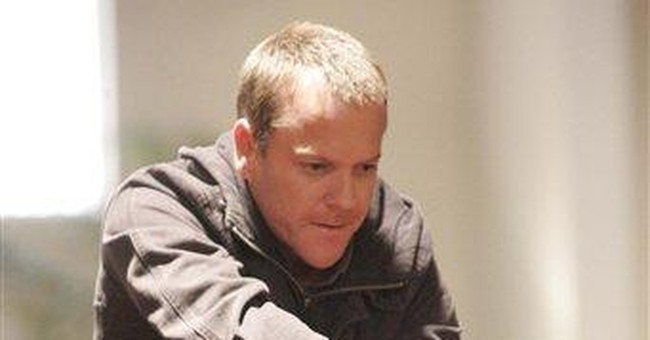 The New Yorker reported this week that the dean of West Point took it upon himself to help put an end to abusive - i.e. torturous - interrogation techniques. He and some leading interrogation experts and instructors flew to La-La Land to talk to the producers of Fox's hit show, "24." Brig. Gen. Patrick Finnegan told the show's creative team that his students were learning terrible lessons about the utility of brutal violence in interrogations. "The kids see it," Finnegan complained to the article's author, "and say, 'If torture is wrong, what about "24"?'"

It didn't take long for the predictable mockery to start. "This controversy is perhaps the most off-the-wall example of the Œpower of television' we've ever heard," chortled the editors of Broadcasting & Cable.

Jumping in from the other side were human rights organizations critical of Hollywood's increasing fondness for torture. The numbers seem to back them up. From 1996 to 2001, there were 102 torture scenes on TV, the Parents Television Council estimates. From 2002 to 2005, there were 624, and the torturers were increasingly heroes rather than villains.

This is a bit of a reversal from the pre-9/11 kulturkampf. Complaints about the coarsening of the culture used to come mostly from the right. Bob Dole even staked much of his 1996 presidential bid on the promise to eradicate the "nightmares of depravity" parading across the nation's screens.

In response to such criticism, Hollywood liberals threw up clouds of rhetorical fog. One retort was that movies and TV shows can't really influence people that much. This strikes me as a bizarre position for an industry that makes so much money from advertising and product placements and whose self-described artists see themselves as "raising awareness" about everything from AIDS to the snail darter.

Another response - favored by former Motion Picture Association of America President Jack Valenti - was populist dudgeon. "Who are you to tell America what's good for them?" they'd squeal, making fun of the prudes and scolds. We saw some of this after Janet Jackson's "wardrobe malfunction." "You've never seen a breast before?" they'd titter.

Yet the most effective response from Hollywood was to raise the specter of censorship. "Censorship" is arguably the second-most-powerful scare word in the nation today, after "racism."

But the joke's on all of us because we're all in favor of censorship; we just get clever about what we call censorship. For example, unless you think profanity, violence and hard-core sex should be legal on broadcast television during the after-school time slot, you're for censorship. We're also all for criticizing bad behavior, bad language and the rest. But because we don't want to think of ourselves as scolds or censors, we make ourselves feel better by calling our positions "common sense."

The problem is that the definition of "common sense" is a moving target. What was once verboten is now commonplace and vice versa.

Marc Cherry, the creator of ABC's "Desperate Housewives," told an interesting story to a gathering of TV critics recently. Cherry had screened a scene for a network censor in which the character played by Eva Longoria beds her 17-year-old gardener. Afterward, she enjoys a post-coital cigarette. Cherry said the censor asked, "Does she have to smoke?" To which Cherry replied: "So you're good with the statutory rape thing?"

What's fascinating about the "24" controversy is how it highlights that there is one permanent exception to the rule: success. Joel Surnow, co-creator of "24," has jokingly described himself as a "right-wing nut job." The critics complaining that Hollywood is dangerously influencing behavior are from the left. And folks like Rush Limbaugh are saying: "It's just a television show! Get a grip." Needless to say, this is not the typical conservative position when Hollywood mocks Jesus or promotes the "gay lifestyle." Meanwhile, "24" gets lavished with Emmys and praise. Why?

Because one of the reasons Hollywood resorts to "nightmares of depravity" is that it's in a constant race to the bottom to keep our attention. Anybody who figures out how to do that is a hero in Hollywood. "Right now, they have to be nice to me," Surnow told the New Yorker, speaking of his liberal colleagues. "But if the show tanks, I'm sure they'll kill me."

That's Hollywood common sense for you.