Which Candidate Will Pass the Beer Test? 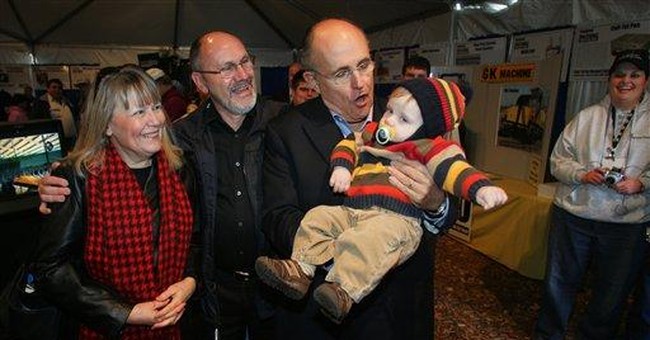 What is it Tommy Lee Jones says in "Men in Black"? "A person is smart. People are dumb, panicky, dangerous animals, and you know it." Similarly, the American electorate is an odd beast, distinct from the American voter. Political scientists, the large-animal vets of this already strained metaphor, find all sorts of odd explanations for the electorate's behavior.

For example, sometimes the critter's stall is too damp, or not damp enough. In 2004, Princeton political scientists estimated that some "2.8 million people voted against Al Gore in 2000 because their states were too dry or too wet," costing Gore seven states, any of which would have cinched the election for him. I can't judge the political scientists' math, but the point is that virtually no individual voter says, "You know, it didn't rain much this year; I'm voting Republican." That's something only voters do in a group.

I bring this up by way of introducing a topic that I guarantee will consume pundits and talking heads about a year from now: Who is the more likable presidential candidate?

We'll talk about this because we have ever since TV changed politics. I can spare you several weeks' worth of a college course on modern politics by telling you that JFK won his televised debate with Richard Nixon (while Nixon won among radio listeners) because the scruffy and angry-looking Nixon seemed like he should be cruising schoolyards in a trench coat.

At least one of the myriad reasons for Michael Dukakis's loss in 1988 was that he seemed like the kind of guy for whom the best time of his life was when as V.P. of his high school chess club, he ascended to the top spot when the president got mono.

This is not an iron rule, of course. In 2000, Gore won the popular vote, and the received wisdom was that Bush was the more likable guy. The 2004 election was more revealing. Bush's handling of the war and the economy was unpopular, yet Bush crushed Kerry in the all-important category of likability. A typical Zogby poll found that 57.3 percent of swingable voters would have preferred to have a beer with Bush. Sixty-seven percent of undecideds liked Bush, while 52 percent disliked Kerry. Hey, What's not to dislike? But here's the trick: The primary system doesn't necessarily produce charmers. Perhaps primary voters like anger. (Remember Howard Dean?) Or, better, maybe they actually care more about issues. But even when they focus on electability, they use the wrong criteria. Many Democratic primary voters opted for Kerry because they believed his military record made him "electable" (translation: I don't like him, but hopefully somebody else will). They would have been smarter to ignore the military stuff and nominate someone who wouldn't prompt John Belushi to smash a guitar against the wall of Delta House.

So the million-dollar question for strategic primary voters is, which candidate will swing voters like? It's a tougher question than it seems because your personal feelings are irrelevant. John Edwards' saccharine populism grates on me to no end, but I doubt average voters will see him as the angry honey-dipped marshmallow I take him for.

Interestingly, the GOP has a significant likability advantage (and disadvantages almost everywhere else). John McCain may be unpopular with much of the Republican base, but Americans would love to go to the pub with him. Rudy Giuliani, too, seems like a good guy with whom to watch a baseball game at the bar. The super-polished Mitt Romney's a tougher call, and Duncan Hunter would be a pain because he'd keep asking the immigration status of the busboys.

But the GOP front-runners (save perhaps Newt Gingrich) all have the advantage over Hillary. She may have star power, but you get the sense that most Americans would like to have their picture taken with her and then drink alone. With the exception of Sen. Christopher Dodd, I'd guess all of the Democratic wannabes are more likable than Clinton, too. Sexism probably is part of the equation, but not as much as Clinton's defenders will claim. There's room for perceptions to change as we get to know the candidates (though we already know Hillary pretty well).

Please don't be scandalized by all of this. It's just something to think about. For the record, I think everyone should vote based on principle. But principles are for a person; they're less helpful when it comes to predicting people.

BREAKING: At Least 7 Injured and One Dead In Seattle Shooting

BREAKING: At Least 7 Injured and One Dead In Seattle Shooting