Canaries in a coal mine 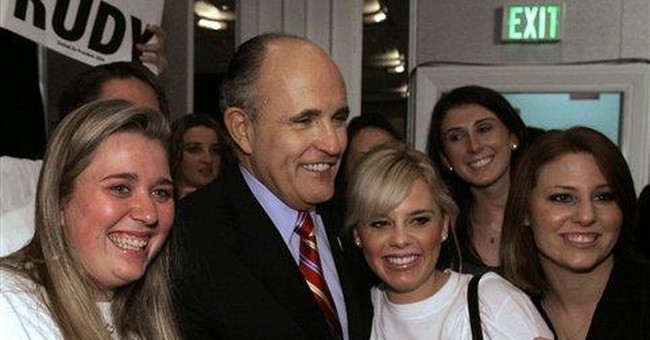 The most interesting political matchup right now is between former Massachusetts Gov. Mitt Romney and former New York City mayor Rudy Giuliani because they're running for the same voters.

Over the last 20 years, the largely accurate conventional wisdom has been that the GOP could not nominate a pro-choice politician, just as the Democratic Party could never nominate a pro-life one. Some Republicans, including Ronald Reagan and the elder George Bush, had to move from a middle-of-the-road position on abortion to the right-hand guardrail, while some Democrats who once leaned to the pro-life side of the road had to make a similar move in the other direction.

That's being put to the test this time around. Romney was a dedicated pro-choice politician for most of his career. When he ran against Ted Kennedy for the Senate, he was as pro-choice as you can get.

Now, at least partly to win over social conservatives, Romney is unapologetically pro-life, saying that he realized the folly of his ways when dealing with embryonic stem cell controversies as governor. I have some quibbles with his conversion story, but that's a subject for another column.

Then there's Rudy. He's going a different way. While tacking and trimming somewhat, he's basically staying pro-choice. Whatever his true convictions, the simple fact is that he has little choice. Unlike Romney, who had the stem cell controversy as an impetus for his conversion, Giuliani - who once almost went into the priesthood - now has no plausible excuse to switch positions even if he wanted one. You need some story, some event, to believably pull off a switcheroo of that proportion, and running for president isn't one of them. So, while he's saying the right - and Right - things about judges and judicial restraint, he's not backing off.

It seems indisputable that prior to 9/11, Romney's strategy would win and Giuliani might not even bother trying.

Of course, Giuliani's national profile expanded enormously because of 9/11. And while the press harps on that point, the more interesting part of the story lies elsewhere. The war on terror hasn't just changed Giuliani's profile as a crisis-leader, it's changed the attitudes of many Americans, particularly conservatives, about the central crisis facing the country. It's not that pro-lifers are less pro-life or that social conservatives are suddenly OK with homosexuality, gun control and other issues where Giuliani's dissent from mainstream conservative opinion would normally disqualify him. It's that they really, really believe the war on terror is for real. At conservative conferences, on blogs and on talk radio, pro-life issues have faded in their passion and intensity compared with the war on terror. Taken together, terrorism, Iraq and Islam have become the No. 1 social issue for conservative base of the party.

Unambiguous polling data is hard to come by on this point, but the anecdotal data is enormous. From my e-mail alone, it's obvious. Books that frontally challenge Islam as a religion have become mainstays of conservative publishing. Meanwhile, Dinesh D'Souza's book, "The Enemy at Home," a passionate, socially conservative polemic calling for the American right to align itself with traditional Muslims against the domestic left and Islamic extremists, has found itself almost entirely undefended on the right for its perceived effort to "blame America first."

William Bennett, the famed "virtue czar," emphasizes the civilizational struggle more than any other and gets an enormous response from social conservatives. Even before the war on terror, evangelicals embraced Israel for myriad reasons, among them a theological affinity for the Jewish state and a faith that it is an imperiled sister democracy. Such convictions are only multiplied and personalized for these Americans by events since 9/11. At National Review's "conservative summit" last month, Romney talked at length about abortion but gave short shrift to the war, and the disappointment in the room was palpable.

That's not to say either Romney or Giuliani will win, but they're the ones to watch because they get to design their first impressions in a way other top-tier candidates like John McCain and Newt Gingrich can't. Romney and Giuliani, both immensely attractive, savvy and well-funded politicians, are in effect the canaries in the coal mine of conservative politics. If either emerges from the dark tunnels of primary season alive, it will tell us a great deal about the future of the GOP and American politics.