Much Ado About The 'A' Word 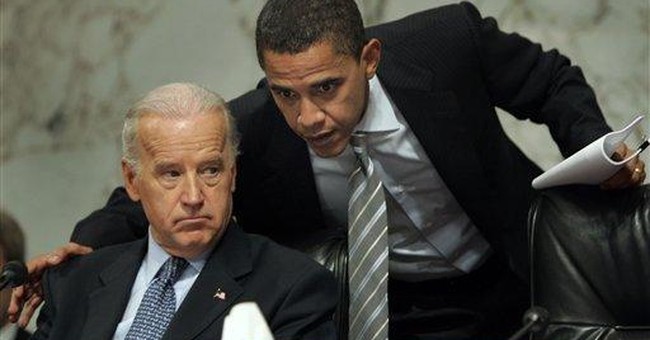 Here's irony for you. Last spring, focus-group guru Frank Luntz said that Sen. Joseph Biden should be considered a front-runner in the Democratic presidential primaries because so many Democrats in New Hampshire and Iowa judged him to be - wait for it - "articulate."

I should back up. Biden is famous for his brain's chronic inability to hold brake fluid. Once he revs his engines, the motormouth can't be stopped, and he just keeps talking and talking and talking. My theory is that those constant smiles where he displays his shiny fake teeth are the facial equivalent of flashing your brights while driving, signaling to those in Biden's path, "I can't stop this thing!"

Anyway, Biden is running for president. On the day he announced, the New York Observer released an interview in which it was clear Biden had no brakes. Asked about Barack Obama, the Democratic wunderkind, Biden said: "I mean, you got the first mainstream African-American who is articulate and bright and clean and a nice-looking guy. I mean, that's a storybook, man."

This statement didn't amuse some folks - and highly amused others, particularly his Democratic rivals. A plain reading is indefensible (as Biden has admitted). First, the word "candidate" is missing, so it reads like he's talking about blacks generally, which everyone agrees is preposterous. But even with that caveat, he seems to be saying that Shirley Chisolm, Jesse Jackson, Al Sharpton and Alan Keyes were lacking some or all of those attributes - mainstream, articulate, bright, clean or nice-looking. Feel free to play pin-the-adjective on the former candidates. But all I will say is that I've met Alan Keyes, and whatever his other flaws, he's so clean you could eat off him.

What I find fascinating is that the least offensive adjective describing Obama - "articulate" - has caused the most offense. The New York Times ran a lengthy essay by Lynette Clemetson on the troubling and pernicious racism behind the oft-used compliment for well-spoken black people. The Washington Post's Eugene Robinson penned a similar meditation arguing that "articulate" is essentially code for not scary to whites. "It's being used to describe a black person around whom white people can be comfortable," writes Robinson.

Obviously, there's ample truth here. Colin Powell, for example, was routinely described as "articulate" when he was pondering a presidential run. But you know what? Powell is articulate. Moreover, if you ever heard him talk to inner-city kids, you'd know he puts a great deal of importance on speaking and writing ability. Why? Because much of low-income black America has a problem in this regard (as does much of low-income white America, I should add).

It's weird: Everyone agrees that our schools are disproportionately failing African-American kids, that there is a cycle of dysfunction afflicting large swaths of lower-class black America. But if you ever point to the consequences of those failures, even in the most oblique and glancing way, someone cries "Racism!"

Clemetson spoke to a host of hyper-successful blacks who are weary of being called "articulate." But nowhere do Clemetson and the people she interviewed address the fact that not all of black America is as articulate as Condoleezza Rice or D.L. Hughley. It's as if white America just made up the idea that proper diction and speech is lacking in some quarters of black America.

Many blacks are deeply sensitive to all of this. Indeed, the whole "Ebonics" fad - a social-science neologism conceived to describe black slang as a distinct dialect, which it is - was designed to cover up the fact that large numbers of black Americans are not articulate in mainstream American English. But as Bill Cosby and others have noted, simply because Ebonics describes something real doesn't mean it's in the best interests of black people to embrace it.

Again, I think complaints from elite blacks about the overuse of the word "articulate" are well-taken to a point. However, not only is it not the code word some are making it out to be, Bill and Hillary Clinton, Al Gore and even Biden himself are routinely described as "articulate," and President Bush is relentlessly dubbed "inarticulate," yet nobody thinks that means he's being called "black."

But more important, the word "articulate" is used to describe eloquent blacks both truthfully and in an important context. Large swaths of black America are not articulate enough to succeed in the 21st century. We are constantly being told that we need a "national conversation" about precisely this sort of thing. But when even the most well-meaning whites use the word "articulate" to describe successful blacks, they're called racist. It's no wonder that national conversation is so slow in getting started.