Isolation, the right and wrong 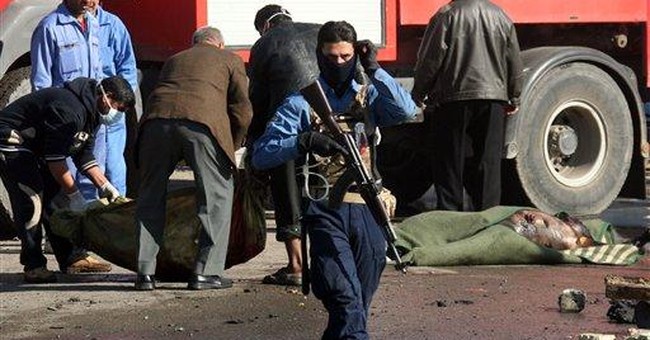 "We would like to see all the peoples of the world enjoying the liberty and freedom that we have," proclaimed Senator A. "But it is written in history that when an autocracy is removed by powers other than the people themselves, that autocracy will be replaced by an autocracy even more vicious. Democracy has never been bestowed upon a people by a paternal outside hand."

Declared famous Senator B: "You cannot, in my opinion, just impose a democratic form of government on a country with no history and no culture and no tradition of democracy."

"We should be more modest in our belief that we can impose democracy on a country through military force," said well-known Senator C. "In the past, it has been movements for freedom from within tyrannical regimes ... that have led to flourishing democracies." Let's call the roll backward. Senator C is Barack Obama, November 2006. Senator B is Chuck Hagel, March 2006. And Senator A? Well, that was former Sen. Joseph McCarthy on July 4, 1939. Before folks get their knickers in a twist about the McCarthy thing, let me say that I'm not calling anybody a McCarthyite. I just as easily could have cited similar quotes going back to George Washington. My point is this: Although isolationism may be misguided, it's also intellectually serious and far more complex than its scare-word usage might suggest. Before and during World War II, the word "isolationism" was employed as a cudgel by the left - code for pro-Nazi - to beat up on the right. It was a grotesquely unfair tactic, employed to question the patriotism and decency of political opponents - and hence shut them up - in much the same way that McCarthy later did to the left. Despite a rich history of left-wing isolationism from Vietnam to Iraq, there's an enduring myth that the I-word can only describe the right. For example, in 2004, the New Republic's Frank Foer suggested that George Will's reservations about the war in Iraq were "hardly surprising" given the conservative movement's isolationist history. Of course, the New Republic itself had initially supported the Iraq invasion - arguably more than Will ever had. It was only when the war started to go badly that the magazine's editors turned against it. But no one would suggest - least of all TNR's editors - that they were retreating into isolationism. What liberals call isolationism when criticizing the right, they dub wisdom when describing their own policies. Conversely, when liberals go marching around the globe, it's internationalism and idealism. When conservatives do, it's imperialism and war for oil. The truth is that "isolationism" was always a misnomer. Most "isolationists" believed in a strong military as well as trade and diplomatic engagement around the globe. "Non-interventionism" is a much better term, and its pedigree begins with Washington's farewell address, which warned against "entangling alliances." In 1821, Secretary of State John Quincy Adams warned, "Wherever the standard of freedom and independence has been or shall be unfurled, there will (America's) heart, her benedictions and her prayers be. But she goes not abroad, in search of monsters to destroy." But that's exactly where the non-interventionists of the 1930s were coming from, too. Theirs was not a pro-Nazi argument, as so many jingoist New Dealers insisted. It was a moralistic argument that empire-building was injurious to liberty at home and inept at fostering it abroad. Nor was it exclusively right-wing. Members and allies of the infamously "isolationist" America First Committee included Joseph Kennedy (who was pro-Nazi) as well as his sons Joe and John. (At Harvard, JFK sent the committee $100 with a note saying, "What you are doing is vital.") John Dewey, the 20th century's most important liberal philosopher, was a non-interventionist, and Charles Beard, its most influential progressive historian, was an extreme one. Sens. Robert La Follette Sr. and Jr., both Progressive heroes, were passionately opposed to foreign intervention, as were Socialist Norman Thomas, financier Bernard Baruch and countless others. Many came to their stance having been disillusioned by the hypocrisy, bloodshed and absurdity of World War I, which most of them supported. Now, I think the non-interventionists in both parties have been mostly wrong since the '30s, though few can deny the wisdom (and vagueness) in Obama's call for more "modesty" about regime change in the future. Foreign policy arguments always depend on context. If Iraq was a "cakewalk," non-interventionism would have been discredited for a generation. Now interventionism has been mortally wounded. But one thing stays the same: Whatever position conservatives hold is evil, while the liberal view is wise and just. But don't you dare call it isolationist. (You can write to Jonah Goldberg in care of this newspaper or by e-mail at JonahsColumn@aol.com.) (C) 2007 Tribune Media Services, Inc.