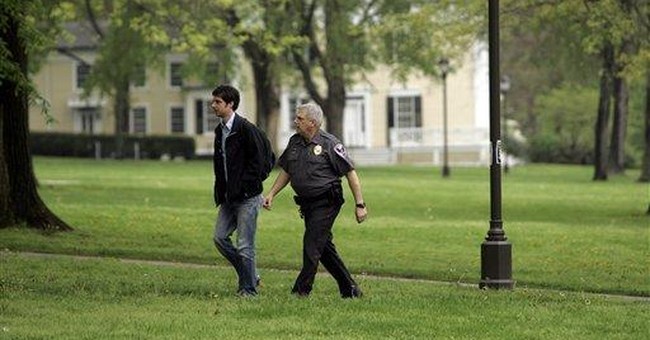 Here's an irony for you: Each year, the most prestigious universities in America—some of them founded long before our country—are ranked to great fanfare by the staff of a third-tier news magazine that has actually stopped its print edition. Its college ranking is pretty much all that's left of U.S. News and World Report—which is really a shame, since its reporting was always better than Time's or Newsweek's. I'm less thrilled about its rankings, which are heavily biased in favor of rich schools that are already famous, where teaching typically comes second to research—much of which is obscure or politically charged.

The top National Universities choices are pretty predictable: Every year, the three or four top Ivies shuffle places with a few massive state schools—not surprising, since nearly half each college's score is based on a) What administrators at other schools say about a college and b) how much the college spends per student. What is worse, the U.S. News guide pretty much pretends that campus politics, classroom bias, and threats to free expression aren't problems—which is rather like ranking restaurants without worrying about their hygiene. To supplement U.S. News' 2010 Liberal Arts Colleges and National University rankings, I'd like to honor the three Most Politicized Colleges in the country:

Wesleyan University, Middletown, CT. (#13): Politically monolithic, Wesleyan makes a cult out of “diversity,” defined by sexuality and demographics—not ideas. One of its special-interest houses on campus is the Open House, “a safe space for lesbian, gay, bisexual, transgender, transsexual, queer, questioning, flexual, asexual, genderf**k, polyamourous, bondage/disciple, dominance/submission, sadism/masochism (LGBTTQQFAGPBDSM) communities and for people of sexually or gender dissident communities.” Yep, they use all the letters.

Barnard College, N.Y., N.Y. (#30): Barnard’s radicalism is so pervasive that most students have, according to one professor, “no awareness that what they’re being taught is varieties of ‘leftism.’ It’s just different aspects of the truth, since there is no alternative ever contemplated.... If the only perspectives on offer are variants of leftism, then the choice is simple: Become ‘active’ in a leftist cause of one sort or another, or else ‘apathetically’ confine your leftist ideas to the classroom and don’t do anything to put them into action.”

Bard College, Annandale on Hudson, NY. (#40): While the school has many pockets of academic excellence, a recent graduate said that at Bard, “politics on campus has a solitary voice. It’s ultraliberal.” By way of illustration: Few at Bard think it strange that the school maintains an endowed chair named for Stalinist spy Alger Hiss. True to the endowment, one past Hiss professor wrote a book that described anticommunism as a psychiatric condition.

U.S. News also declines to offer any guidance about the curricula at given schools. You won't learn from its rankings whether you can graduate from Harvard (#1) without reading Shakespeare (you can) or Columbia (#8) without reading the Federalist Papers (you can't). The fact is that at most “prestige” colleges—with the honorable exceptions of Columbia and U. Chicago (#8)—core curricula were junked in recent decades. Remember Jesse Jackson's Stanford University (#4) chant in the 1980s, “Hey-hey, ho-ho, Western Civ has got to go”? Well, it went. Except at a few select liberal colleges and Great Books schools, core curricula have given way to lame, vague “distributional requirements.” Students can “kill off” their lit requirements with courses on, say, Japanese anime, and even pad their majors with classes steeped in trendy theory, or “victim studies” courses. To illustrate the point, let me offer laurels to the schools with the Three Lamest Curricula in America:

Brown University, Providence, R.I. (#16): This university is famous for imposing no distributional requirements, and permitting students to take (if they wish) all courses pass/fail. While many departments are excellent, the school makes no official effort to keep its students from turning into either narrow specialists or dilettantes.

Amherst College, Amherst, MA (#2): Another school with no distributional requirements. Its “open curriculum,” the college boasts, makes students the “architects” of their own education—instead of, for instance, the well-paid administrators whose job it usually is to guide and shape students' formation. So students can skip math if they're scared of it, opt out of basic writing classes and foreign languages.... Yankees go home.

Hamilton College, Clinton, N.Y. (#21): Hamilton’s once-rigorous curriculum obliged its students, already well schooled in Greek and Latin, to continue their studies in those ancient languages, as well as in mathematics, religion, history, philosophy, and the humanities. Today, the college “urges” and “suggests” certain kinds of courses, but it does not require any in particular. “Experimental education” and “interdisciplinary perspectives” are the lingua franca now. One professor complains that Hamilton’s “curricular freedom” makes it “likely that students will learn more about condoms than the Constitution.”

Students or parents interested in a college that offers genuine intellectual diversity, free expression, and solid curricular guidance ensuring that each student gains the “liberal” (e.g. liberating) education that formed our Founders had better look elsewhere than the beauty contest conducted each year by U.S. News.