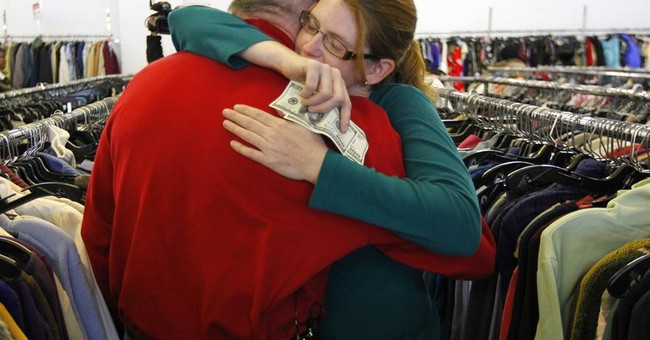 'Tis the season for giving.

But when you give, do you know your money will help someone?

Social workers say, "Don't give to beggars." Those who do give are "enablers," helping alcoholics and drug users to continue bad habits. It's better to give to charities that help the "homeless." I put "homeless" in quotes because my TV producers have quietly followed a dozen of the more convincing beggars after "work," and all had homes.

Once, I put on a fake beard and begged for an hour. At the rate money was coming in, I would have made ninety bucks in an eight-hour day -- $23,000 per year, tax-free! I see why people panhandle.

Their success, however, means that people who give them money, no matter how good their intentions, are not engaging in real charity. Giving may make you feel better, but it doesn't make the world a better place.

So where should we give? Charity-rating services try to separate good charities from scams, but they get conned, too. The definition of "charitable work" is rarely clear. How should the board of a nonprofit's first-class hotel expenses during a trip to Africa be classified?

That's why I give to charities I can watch. I donate to The Doe Fund, a nonprofit helping to rehabilitate ex-convicts. I saw their "Men in Blue" working near my apartment -- cheerfully and energetically. I thought, "Whoever's rehabbing these guys is doing something right!" So I give money to them -- and to a couple other groups I can see.

Finally, I give more to charity because I'm not much of an entrepreneur. I don't have business-building skills. But for those who do, here's a novel idea: Don't give to charity.

Years ago, Ted Turner was praised for donating a billion dollars to the United Nations. He said he wanted to "guilt" other billionaires into giving more and told me Warren Buffet was "cheap" for giving too little.

But giving it a second thought, I found a fallacy in Turner's argument. The U.N. is a wasteful bureaucracy, leading me to assume it squandered Turner's gift. Buffet, meanwhile, continued to direct his investors' money to growing companies. Based on Buffet's stock-picking success, his investments were probably a more productive use of capital than Turner's. Money went to people making better products, inventing better things, creating more jobs and so on. Maybe Buffet's stock picks are now funding the next Bill Gates.

Today, the real Gates spends his time giving money away. He's unusually conscientious about it. He experiments, funding what works and dropping what doesn't. His charity work saves lives. Good for him. But Gates was also unusually skilled at bringing people better software. Had he continued doing that at Microsoft, I bet the company would have been even more productive. And Gates would have done more for the world.

I tried that thought experiment on Turner, who, in turn, unclipped his microphone and walked off the set.

OK, so people who give away a billion dollars don't want to hear skepticism about their gift. But there's little doubt capitalism helps people more. Even rock star Bono from U2 has come to understand that. He used to call for more government spending on foreign aid. Now he says: "Aid is just a stopgap. Commerce, entrepreneurial capitalism take more people out of poverty."

Bingo. If Bono gets it, Turner should, too.

I applaud those who give to charity, but let's not forget that it's capitalists (honest ones, not those who feed off government) who do the most for the poor. They do more good for the world than politicians -- and more even than do-gooders working for charities.