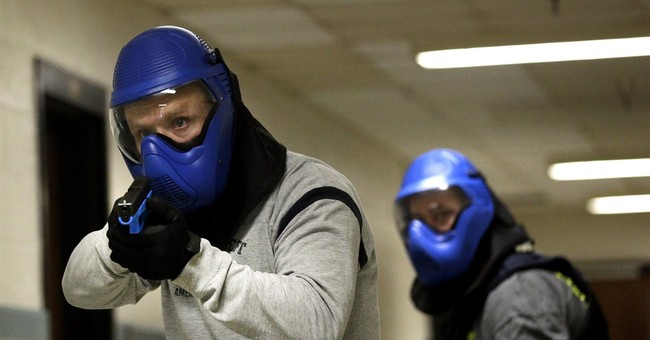 Trending
We need police to catch murderers, thieves and con men, and so we give them special power -- the power to use force on others. Sadly, today's police use that power to invade people's homes over accusations of trivial, nonviolent offenses -- and often do it with tanks, battering rams and armor you'd expect on battlefields.

In his book "Rise of the Warrior Cop," Radley Balko recounts the rise of police SWAT teams (SWAT stands for Special Weapons And Tactics) armed with heavy military equipment. SWAT raids began as rarely used methods of dealing with violent situations, like hostage-takings.

What began as a few specialized groups of police trained to address genuine threats to safety has degenerated into small armies descending on organic farms where farmers sell unpasteurized milk and legal medical marijuana dispensaries getting raided as if they were heavily armed threats.

The increase began under Nixon-era politicians who wanted to look "tough on crime," even if that meant exaggerating the threat posed by illegal drugs. As the futile war on drugs escalated, cops worried that drug users would destroy evidence if cops knocked and announced themselves. So they stopped doing that, changing a centuries-old rule that treated citizens' homes as their castles -- castles whose owners must be presented with a warrant before police can enter.

Soon, every police department wanted a SWAT team -- and many were more interested in getting cool military gear than in considering the potential downside -- like terrorizing innocent people, raiding the wrong house and causing violence.

"I found over 50 cases where a completely innocent person was killed in one of these raids," says Balko. Often this happens because the homeowner does not realize who is breaking down his door in the middle of the night.

Iraq War veteran Jose Guerena just knew that armed men were bursting in. So he picked up his semi-automatic rifle. Before he could take the safety off, police fired 71 bullets, hitting him 22 times.

Police raided his house because they suspected drugs were there. But after Guerena was killed, police found no drugs and no evidence of drug dealing. Today, the vast majority of SWAT raids are about drugs, not terrorism or hostage situations. Guerena's brother was arrested on drug charges. Balko says, "It appears Guerena's crime was being related to someone."

Now that the public is finally starting to have doubts about the drug war, another type of war has arrived: the War on Terror. The idea that domestic enemies need to be raided and rooted out -- that law enforcement should be given a free hand or we could all be killed -- got a new lease on life.

And a new source of funding.

Despite laws clearly saying that soldiers may not be used for domestic policing except in very special circumstances, the Pentagon and the Department of Homeland Security now offer armored vehicles -- tanks and troop transports, body armor and stun grenades -- to police departments, large or small.

Local police jumped at the chance to have new toys -- so they expanded the circumstances under which those toys get used.

The police chief in quiet Concord, N.H., cites people not so different from me as an excuse for getting DHS money to buy an armored vehicle. In an application for what is essentially a tank, he wrote that groups like the Free State Project -- libertarians who moved to New Hampshire seeking increased individual freedom -- pose "daily challenges" to the police of Concord.

Free Staters better watch out next time they get into an argument over a traffic ticket.

Most libertarians argue that police, courts and military are legitimate functions of government. We focus our skepticism on completely illegitimate government actions, like corporate welfare.

But few freedoms are more basic than being able to sleep securely in your bed without armored men bursting through your door.