Memo to the House: Adopt the Filibuster 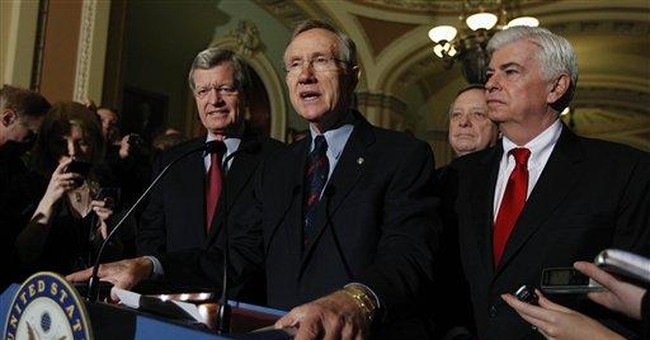 The filibuster is sure taking its lumps these days. New York Times columnist Paul Krugman says "the Senate -- and, therefore, the U.S. government as a whole -- has become ominously dysfunctional". The Democrats won the White House and Congress last year and should have had no trouble passing the health care overhaul, yet "the need for 60 votes to cut off Senate debate and end a filibuster -- a requirement that appears nowhere in the Constitution, but is simply a self-imposed rule -- turned what should have been a straightforward piece of legislating into a nail-biter. And it gave a handful of wavering senators extraordinary power to shape the bill."

Why is this "dysfunctional"? I assume Krugman would praise the filibuster if a President Palin and Republican Congress were ramming bills through. Regardless of what senators in the 19th century had in mind, the filibuster is a wonderful antidote to the tyranny of the majority. It's no argument against it to say that the statists' favorite piece of legislation didn't fly through smoothly enough. They'll have to come up with a better case than that.

There is no greater threat to individual freedom and autonomy than government. The threat from private freelance crime is small potatoes compared to the daily usurpations of the state, with its taxation, regulation, privilege-granting, inflation and war. Pierre-Joseph Proudhon's immortal passage has never been topped:

"To be governed is to be watched, inspected, spied upon, directed, law-driven, numbered, regulated, enrolled, indoctrinated, preached at, controlled, checked, estimated, valued, censured, commanded, by creatures who have neither the right nor the wisdom nor the virtue to do so. To be governed is to be at every operation, at every transaction noted, registered, counted, taxed, stamped, measured, numbered, assessed, licensed, authorized, admonished, prevented, forbidden, reformed, corrected, punished. It is, under pretext of public utility, and in the name of the general interest, to be place(d) under contribution, drilled, fleeced, exploited, monopolized, extorted from, squeezed, hoaxed, robbed; then, at the slightest resistance, the first word of complaint, to be repressed, fined, vilified, harassed, hunted down, abused, clubbed, disarmed, bound, choked, imprisoned, judged, condemned, shot, deported, sacrificed, sold, betrayed; and to crown all, mocked, ridiculed, derided, outraged, dishonored."

That just about covers it.

So I favor any procedural methods that can slow down government's legislative juggernaut. During the health care debate, commentators often referred to the lawmaking process as sausage-making, a reference to this quote, usually misattributed to Otto von Bismarck but spoken by poet John Godfrey Saxe: "Laws, like sausages, cease to inspire respect in proportion as we know how they are made."

What those commentators overlooked is that it's the taxpayers who get ground up.

Of course, the filibuster and other stalling methods can be used to stop bills that would advance liberty, like tax cuts and the repeal of restrictions. But I'll play the odds. On any given day, what is Congress more likely to do: violate or expand liberty? As 19th-century New York Judge Gideon Tucker put it, "No man's life, liberty or property are safe while the legislature is in session."

Libertarian science-fiction writer Robert Heinlein had a good idea. One of his novels depicted a bicameral legislature with one chamber needing a supermajority to pass laws and the other needing only a minority of votes to repeal them.

By the standard of protecting freedom and keeping government caged, that's not a bad idea. It should be easier to repeal laws than to pass them.

After all, look at what Congress has been up to lately. Our "leaders" are on the verge of passing a Rube Goldberg-like contraption that would raise insurance prices, compel everyone to buy insurance, increase America's debt, destroy jobs and limit innovation. Low-income people, as usual, will get the worst of it -- despite the politicians' boast that they are "covered."

If any piece of legislation is worthy of procedural burial, this is it. One need not be a fan of Republicans to be pleased that they gave the filibuster a try.

So let's not kill the filibuster. In fact, I have a better idea: Let's extend it to the House.