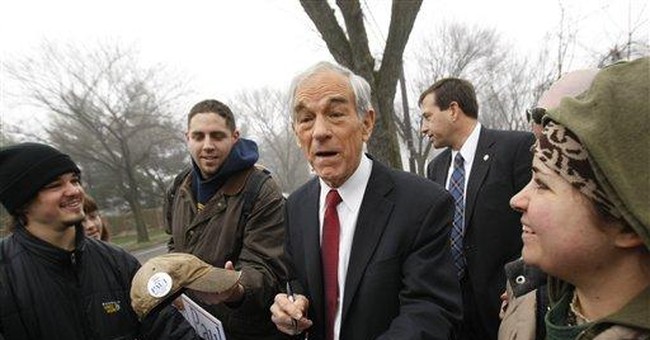 U.S. congressional representative and Republican presidential contender Ron Paul has been called "Dr. No" because he repeatedly votes against legislation he believes gives government too much power. If it's not in the Constitution, he says, the federal government has no business doing it. He even votes against appropriations to his constituents. Here's Part 3 of my edited interview with Rep. Paul.

Your district is subject to floods, but you vote against FEMA. Why?

Ron Paul: Because I think FEMA helps create the flood problems. (Without subsidies,) if it's risky on the Gulf Coast to build there, the insurance prices will go up. If (they're) too high, nobody will build there, or they'll build there with full risk. Flood comes, wind blows your house away, you don't get reimbursed. So there might be (only) modest building in those areas. But if the government subsidizes the insurance, saying, "If you build there, don't sweat it, we're going to bail you out," more people move into the flood-prone areas. Then who are the people that have to bail you out? Somebody that lives out in the desert. It's unfair, it's not good economics. You create more problems, more houses get flooded, and it becomes a general problem rather than an individual problem. We have undermined is the principle of measuring risk. Then people do things that they wouldn't have otherwise done.

You also say, "no farm subsidies."

No, I can't quite find (the farm-subsidy program) in the Constitution.

Don't we need farm subsidies to make sure we have food?

It is totally unnecessary. I think (subsidies) push the prices of food up, and maybe (that) makes it more difficult for poor people to buy food. If there's a subsidy, it means the taxpayer was taxed to pay a huge corporate farmer. So it hasn't helped the people. And why should we assume that the farmers wouldn't be productive? They're hard working people. I never voted for farm subsidies, and I represent a farm district.

They forgive you for that?

The farmers will support me, but not the (farm lobby) organizations.

Most crops don't have subsidies. Yet we have plenty of (unsubsidized) peaches and plums.

When I go to the grocery store, I always marvel: Isn't it wonderful how we can see so much fresh produce there, and the prices aren't regulated? It was a fallacious argument back in the '30s that the Depression came from free markets and therefore we had to have a safety net. We gave up on believing in freedom and understanding how the market works.

You talk about freedom and tyranny. I seldom hear politicians use those words.

Those are our only two choices. We've had a grand experiment in this country, where we emphasize freedom. The Constitution was designed to protect individual liberty, to restrain the government. But we have forgotten that. Now we have an interpretation that means that we spy on the American people, encroach on their privacy, take care of them, run the "nanny state" -- and then we have secrecy in government. So we have it reversed. People say, "Ron, you want to go back to the dark ages of this strict interpretation of the Constitution." Well, I want to go back to the Constitution, but I don't consider it the dark ages. I think the dark ages the days were when all you had was tyranny. Freedom is new. Tyranny is old.

The Declaration of Independence and the Constitution are enough? We don't need 55,000 pages of tax code?

Isn't that fantastic? Truth is simple. The more complex (government) is, the more leery we ought to be of what they're doing. When they say we have to solve the problems of 9/11 (by passing) the Patriot Act, that's complex. Four hundred pages, and they dump it on us an hour before we vote. You can read the Constitution and understand it, but you cannot read and understand hardly any of the legislation being passed.

Next week: Ron Paul on immigration.