The Return of Toilet Man 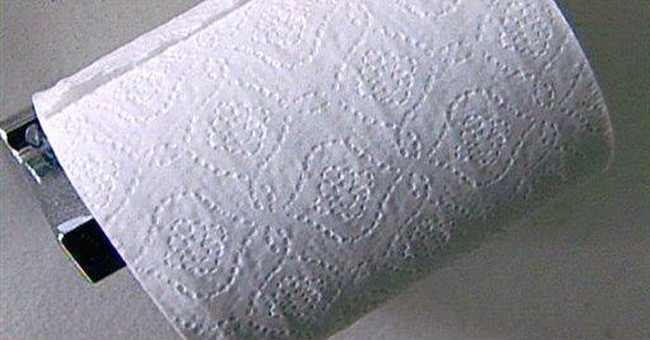 "Don't bother debating with John Stossel and the libertarians. They are worst than Republicans."

That's a comment from climateprogress.org, Joe Romm's blog about global warming. It was a reaction to C-SPAN's coverage of an Independent Women's Forum (IWF) discussion on energy policy that I moderated last week.

Romm was the star of the event. I didn't recognize him until he reminded me I'd interviewed him a decade ago. Then I remembered he was "toilet man." That's what I called him privately when he was the energy department bureaucrat under President Clinton who defended the government's demand that all of us buy "low-flow" showerheads and "water-saving" toilets.

I did a "Give Me a Break" segment on that for "20/20" mocking the endless rule-making process, which somehow concluded that exactly 1.6 gallons is all that every toilet needs. I interviewed people who were so unhappy with their new toilets that they were combing junkyards for old ones, or going to Canada to buy them, because 1.6 gallons doesn't always get the job done. Homeowners and apartment managers kept telling meme, "The toilets don't work!"

"They do now," Romm said to me last week. Manufacturers eventually made 1.6 gallons flush successfully, proving, he suggested, that my "Give Me a Break" was misguided and that government rules spur improvements. Now, he says, we need to save the earth by passing rules that restrict carbon use.

The fact that it took years for manufacturers to solve the flushing problem, at great expense to consumers, and that during that period many people had to flush several times, wasting lots of water, and that the one-size-fits-all rule applied to all of America, forcing flushing embarrassment and lousy showers on people in Vermont and other places that have plenty of water and don't need to conserve, and the water savings were less than 6 percent of what farms use every day for irrigation -- none of that bothers Romm.

He now works at the Center for American Progress, a lefty think tank where policy wonks seem to think that government telling us what to do is the solution to many problems.

Of course, simply privatizing water distribution, allowing its price to rise or fall as supply and demand warrant, would have been a far fairer solution. But President Clinton's energy department didn't want to bring in the evil free market.

Now, "let the market work" is a slogan among the segment of global-warming catastrophe crowd that advocates carbon "cap and trade."

I'm all for trade.

But there's less talk about the "cap" part. That's the government force part.

Will chimney police come to your home? Will Al Gore tell us when we can run our air- conditioners? Will a federal officer be stationed at every factory? Romm was honest enough to admit, "I am certainly not here saying that this is going to be a free lunch."

No, there isn't. If the global climate change hysterics take over, we will pay and pay.

And to what end? In Europe, where panicky politicians have forced cap and trade on their constituents in what John O'Sullivan calls "the universal sign of conspicuous virtue," energy now costs more, but most countries still have failed to meet their Kyoto carbon-emission targets.

I did have the satisfaction of ending the IWF panel by reminding the audience of global-warming guru James Hansen's prediction years ago, that New York City's West Side Highway would soon be "under water."

Romm blogged that the prediction is "needless to say ... nothing Hansen ever said."

But he did say it, and one of Romm's fans even corrected Romm on the blog: "Chad" wrote: "I tracked down that quote from Hansen.... [H]e said ... 'the West Side Highway will be underwater.' ... [T]here would also be a drought and the trees on the median strip would be dead."

I just looked. The highway's still there. The trees are healthy, too.