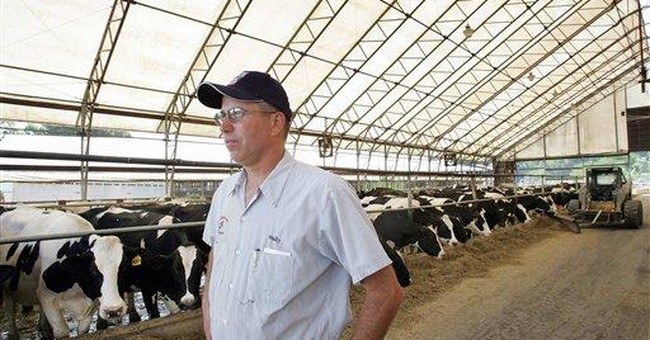 And they say you can't take it with you.

Defending the USDA, the GAO adds, "The complex nature of some farming operations -- such as entities embedded within other entities -- can make it difficult for USDA to avoid making payments to deceased individuals."

Exactly. The agricultural section of the U.S. code is nearly 1,800 pages.

There's an easy way to avoid such absurdities: Abolish all farm subsidies.

Why are taxpayers forced to pay farmers $25 billion a year? Sure, farmers face droughts and floods, but that's been true since Moses' day. They can't say they weren't put on notice that farming has risks. Running a restaurant or a software company entails risks, too, but we don't guarantee their continued operation. Those businesses and America are stronger for it.

Farm subsidies are popular with politicians because Big Agriculture lobbies hard, and many people believe that without subsidies, we wouldn't have a reliable food supply.

But what an insane myth that is. As I wrote in "Myths, Lies, and Downright Stupidity", most crops are not subsidized. Yet we have no shortages of fruits, vegetables, livestock and poultry. America has plenty of peaches, plums, peas, green beans, etc., and farmers who grow those crops do fine. What makes wheat, cotton, corn, soybeans and rice different?

Last week, the New York Times reported that dairy farmers in New Zealand get along perfectly well without subsidies : "[E]ver since a liberal but free-market government swept to power in 1984 and essentially canceled handouts to farmers -- something that just about every other government in an advanced industrial nation has considered both politically and economically impossible. ... [O]utput has soared."

Yet in America, our congressmen enact a 742-page farm bill that, among other things, includes 10 times more money than in 2002 for "specialty crops," including citrus, tomatoes and melons, and an amendment to include goat meat in the mandatory Country of Origin Labeling Program.

An amendment that would have withheld subsidies from farmers with incomes of $250,000 or more was rejected by the House.

The farm program is repulsive welfare for the rich. The average farmer earns much more than the average American.

And even rich nonfarmers have received subsidies -- among them the late Ken Lay of Enron; Ted Turner, founder of CNN; my ABC colleague Sam Donaldson; and banker David Rockefeller.

And how absurd is this? "After handing out commodity subsidies that pay farmers to plant more crops," Heritage Foundation senior fellow Bruce Riedl notes, "Washington then turns around and pays other farmers not to farm 40 million acres of cropland each year -- the equivalent of idling every farm in Wisconsin, Michigan, Indiana and Ohio".

It's time we got over the myth that the government helps the heroic family farm. Riedl points out that "federal farm policies specifically bypass family farmers. Subsidies are paid per acre, so the largest (and most profitable) agribusinesses automatically receive the biggest checks."

Besides all the obvious ones, there's another reason to end farm subsidies. They show us to be hypocrites. How can we preach free trade in talks with developing nations when we subsidize farmers who then dump their crop surpluses in poor countries and wreck their domestic farms?