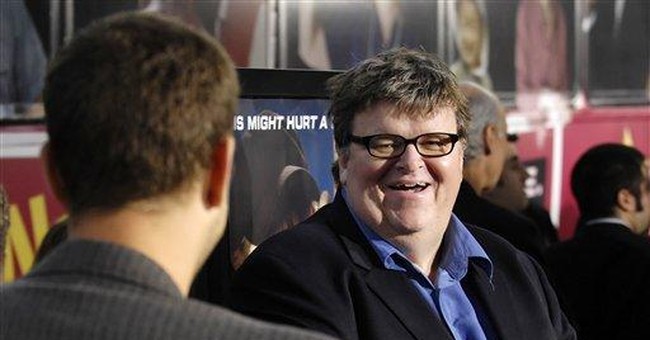 Last week, I bemoaned New York Times columnist David Brooks's eagerness to have government impose force on others. He was promoting programs like "National Service." Why are many conservatives so eager to wield force? Conservatives used to complain when so-called liberals did that.

That same week I happened to interview filmmaker Michael Moore for "20/20." Moore wants government to monopolize health care. His new film, "Sicko," argues that Canada and France approach paradise because their governments provide health care and more. This brought him standing ovations in Cannes.

"But government is force," I said to him. He was incredulous.

Michael Moore: Why do you see it as force?

Me: Because government takes money with force from people and gives it to others.

Is it really necessary to explain that government is force? When the Salvation Army asks you for a donation, you are free to say no, and you suffer no consequences. When the U.S. government demands a tax return and a check on April 15, you can't say no and go about your business. You comply or face fines or imprisonment. Yes, you get to vote for candidates periodically. But having an infinitesimal say in who will coerce you doesn't change that fact that they are using force.

Increasingly, it seems that the biggest difference between conservatives and "liberals" is that the conservatives know government is force. But that doesn't stop them from using it.

Michael Moore may not have thought about it, but there are only two ways to get people to do things: force or persuasion. Government is all about force. Government has nothing it hasn't first expropriated from some productive person.

In contrast, the private sector -- whether nonprofit or a greedy business -- must work through persuasion and consent. No matter how rich Bill Gates gets, he cannot force us to buy his software. Outside government, actions are voluntary, and voluntary is better because it reflects the free judgment of creative, productive people. As I wrote in "Give Me a Break" [http://tinyurl.com/2bx2ut]: "If government would just back off, the private sector will provide many of the same services faster, better, and cheaper." There are plenty of examples that should astound the socialists, like better private water works, ambulance services, roads, even air-traffic control.

Of course, I'm talking about a private sector that gets no privileges from the state. That doesn't describe our private sector now. For years government has bestowed all kinds of favors on special interests, from trade restrictions on foreign competitors to cash subsidies and cheap loans to corporate tax deductions for health insurance. People in and out of government have conspired to pollute the voluntary private sector with force and regimentation. That's why we have a mixed rather than a free economy.

Thomas Jefferson said, "The natural progress of things is for liberty to yield and government to gain ground." Was he ever right! Liberty yields as well-intentioned busybodies try to "fix" the world by stopping you from using gasoline or forcing you to finance antipoverty programs.

No behavior is too small or private to escape the schemers. When a New Zealand couple recently named their child "4real," the Washington Times said it was "unfortunate" that the government doesn't forbid that. The "conservative" newspaper named the couple "Knaves of the Week."

That prompted Donald Boudreaux, chairman of the economics department at George Mason University, to write the editor: "I choose you as my 'Knave of the Week' for asserting that the decision on naming a child should belong to politicians and bureaucrats rather than exclusively to that child's parents. True knaves are those who arrogantly impose their tastes and preferences upon others."

Exactly. "Live and let live" used to be a noble approach to life. Now you're considered compassionate if you demand that government impose your preferences on others.

I prefer "live and let live."