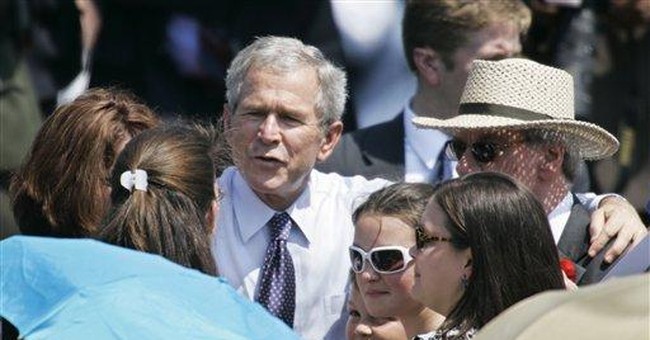 The federal government keeps growing, as I pointed out last week, but the Bush administration has cut tax rates a few times since 2001. How can that be? The answer is simple: deficit spending.

Some Republicans argue that deficits don't matter; that if you cut taxes, everything else takes care of itself. But that's a myth. Yes, the tax cuts stimulated the economy and increased tax revenues. It happens because, as the Laffer Curve illustrates, lower rates mean higher rewards for productive activities. People undertake investments and work that higher tax rates had discouraged. They are also less likely to invest time and energy in using accountants and tax lawyers to find ways to avoid taxes.

That's all good, but there's a downside to cutting tax rates without cutting spending. Deficit spending disguises the real burden of government. As a result, we get more than we'd want -- and that's not good. Government makes up the deficit either by borrowing, which removes productive resources from private hands and must be repaid by future taxes, or by creating money out of thin air -- inflation -- which steals purchasing power from us by devaluing our money.

In other words, tax cuts without spending cuts are an illusion. The burden of government has not really been lightened. As the late Milton Friedman constantly pointed out, that burden is better measured by the level of spending, not the level of taxes. Shame on the Bush administration for trying to pull a fast one on the American public.

President Bush brags that the deficit is coming down -- and it is. It's expected to be "only" $244 billion by the time the current fiscal year ends. And the Office of Management and Budget projects a surplus in 2012. But that's largely because your FICA taxes currently exceed Social Security and Medicare payments. That will change in 2017 and 2019, respectively, when the baby-boomers retire en masse. After that, the Social Security and Medicare budgets begin to go south. Sharply. Avoiding devastating deficits then will take a Houdini.

Let's give President Bush some credit for the falling deficit. Because of his tax cuts, tax revenue -- our hard-earned money -- is pouring into the government's coffers, Government spending is keeping ahead of that torrent, but at an ever-slower rate. Hence the shrinking deficit. But this is not necessarily a good thing.

Bush boasted last year, "This economy is growing, federal taxes are rising, and we're cutting the federal deficit faster than we expected. Some in Washington say we had to choose between cutting taxes and cutting the deficit. Today's numbers show that that was a false choice. The economic growth fueled by tax relief has helped send our tax revenues soaring."

But I don't want tax revenues to soar. That's money you and I could be spending for things we want. I want revenue and spending and government overall to shrink. So I'm not celebrating with the president. The deficit is shrinking because the government takes more and more out of the productive private sector each year.

This was foreseen by anti-federalist writer Melancton Smith in 1787: "[A]ll governments find a use for as much money as they can raise."

Things haven't changed much in 220 years.