The Media Likes Scaring Us, and We Like It 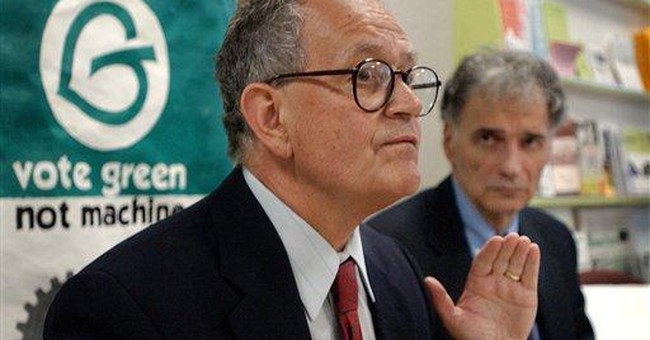 I'm embarrassed by my profession.

We consumer reporters should warn you about life's important risks, but instead, we mislead you about dubious risks.

I first started thinking about this when interviewing Ralph Nader years ago, before he stopped speaking to me. Nader worried about almost everything: Food? "It can spoil in your own refrigerator," Chicken? "[It's] contaminated with pesticides, herbicides, fungicides." Flying? "Inadequate maintenance." Carpets? "Rugs are dirt collectors. And dirt collectors mean internal, indoor air pollution." Coffee? "Caffeine is not very good for you."

He went on and on. Just interviewing him was exhausting. Nader and interest groups like his fuel the Fear Industrial Complex: the network of activists, government bureaucrats, and trial lawyers who profit by scaring people.

The media should be skeptical of their prophesies of doom, but we rarely are.

My TV program, "20/20," has done frightening reports on the dangers of paper shredders, soccer goals, lawn chemicals, cell phones, garage-door openers, and more. There's always some truth behind the scares -- someone got hurt, or some study somewhere found a risk. But we rarely put the danger in perspective. We give you a breathless rush of alarm over every possibility, often delivered with a throbbing rock beat.

Sometimes we don't even get the numbers right. Remember the summer of the shark? It was nonsense. That summer the number of shark attacks was hardly different from two previous years. But in those other years we had an election to cover, or OJ was on trial. Mid-summer 2001 didn't bring many sexy stories, so Time did a cover story on "the Summer of the Shark."

It should have embarrassed the media into putting risks in perspective. But it didn't.

Listening to us, you'd think our growing exposure to pesticides, food additives, and other mysterious chemicals has created America's "cancer epidemic." But in truth there is no cancer epidemic -- cancer incidence is flat, and death rates have been falling for years. But such good news doesn't get much play. No interest groups benefit from it.

Remember the breast-implant scare? Some lawyers and activists said silicone from breast implants caused lupus, breast cancer, and more. Connie Chung did a scare story on CBS, the FDA banned silicone implants, and soon many women were certain that their medical problems were caused by their implants.

How could they not think that? The Fear Industrial Complex told them they were being slowly poisoned. Lawyer John O'Quinn helped spread the fear and reaped the reward. He sued implant makers again and again until they paid his clients over $1 billion. Fortune called O'Quinn and his partner "lawyers from hell." O'Quinn won't say how much money he made off those lawsuits, but he's now rich to have a warehouse that holds 900 valuable cars.

After the suits from O'Quinn and others bankrupted implant maker Dow Corning, and after many women were terrorized -- some so much they cut their own breasts open to get the implants out -- scientists started saying there's no evidence that silicone causes autoimmune disease and cancer. Study after study failed to find a link. Sherine Gabriel, chair of the department of health sciences research at the Mayo Clinic, announced that there was "no significant difference in the occurrence of connective tissue diseases between the women who had the implants and the women who did not."

The FDA has now re-approved silicone implants, and thousands of women are having implants inserted, implants that contain the very same silicone that was used before.

So has O'Quinn apologized for scaring women and bankrupting Dow Corning? No. Did he give the money back? Of course not. The lawyers never do. Instead, O'Quinn impugns the authors of the medical studies. "Who bought and paid for that science?" he said to me, indignantly. He told me he's proud to sue rich businessmen.

Reporters rely on lawyers like O'Quinn, bureaucracies like the FDA, and interest groups like Nader's to give us safety warnings and "dirt" on evil companies. We should be more skeptical. The Fear Industrial Complex has motives of its own.

Next week we'll look at another example of how the media scare us stiff.