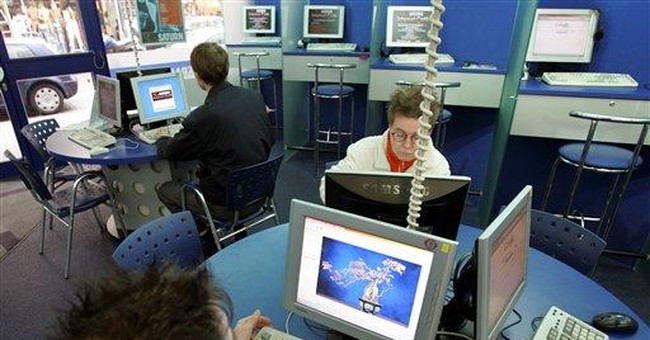 Politicians and security analysts constantly remind us that a terrorist attack is just a matter of time. Clark Kent Ervin, former inspector general of the Department of Homeland Security and author of "Open Target: Where America is Vulnerable to Attack," says we must have tougher security at stadiums, shopping malls, and even schools. "We can have deterrence measures like police patrols ... greater use of bomb-detecting dogs, and bomb sensors, other such technologies ... random bag searches," he told me. "If terrorists see that such measures are in place, they're less likely to strike."

This seemed illogical to me, and so I was delighted to discover the book "Overblown: How Politicians and the Terrorism Industry Inflate National Security Threats, and Why We Believe Them." Its author, Ohio State political science professor John Mueller, points out the folly of arming shopping-mall guards: "A terrorist would say, well, if that mall has guards around it, I'll go the one that doesn't. ... If you protect one thing and you simply displace the terrorist to a different threat ... it's an exercise in futility."

Mueller also says the threat to the average American is overblown. "Your chances of being killed, at present rates, by an international terrorist outside of a war zone is something like 1 in 80,000," he says. "It's about the same as being killed by an asteroid."

But on Sept. 11, almost 3,000 people died! Mueller replies that 9/11 was not a typical terrorist attack. Terrorists were able to capture four planes, and two huge buildings collapsed. "It's a spectacular exception to what terrorists have been able to do," he said. Sure enough, since 9/11, the biggest terrorist successes have been the bombings of commuter trains in Madrid and a nightclub in Bali. The death toll from each attack was about 200 people. "Outside of war zones, the amount of destruction is maybe 200 people a year," says Mueller. "That's 200 people too many, but that's hardly an existential threat. In the United States, between 300 and 400 people die every year just from drowning in bathtubs."

He says there's a terrorism industry -- I call it the "Fear Industrial Complex" -- made up of the media, the bureaucracy, business, and politicians. "Politicians notice that when they hype the terrorist threat, people respond favorably," Mueller says.

Then the bureaucracy hypes terrorism to justify its pork.

Lots of small towns do get absurd grants for homeland security. Lake County, Tenn., a rural county with only 8,000 people, got nearly $200,000 in homeland-security money.

At least he didn't do what Columbus, Ohio did: spend it on bulletproof vests for police dogs.

Ervin concedes that some security money is wasted, but still says we need to spend more. "It's very important to reassure the American people that our government is doing everything it can to protect them," he told me. "If we do that, we will have succeeded in denying terrorists a major victory."

No. The opposite is true. It's overreacting that would give them a victory.

Of course, terrorism is a real threat. But fear kills people, too. A University of Michigan study found that an additional 1,000 Americans died in car accidents in the three months after Sept. 11, because they were afraid to fly. We need to keep risk in perspective.

"We have had dark moments in our history, far darker moments than those we face today," says The Rand Corporation's Brian Michael Jenkins. After studying terrorism for 40 years, he likes to remind people, "We've come through wars, plagues, pandemics ... The response to terrorism cannot be diving under the kitchen table and living in a state of fear. That's exactly what the terrorists are attempting to create."