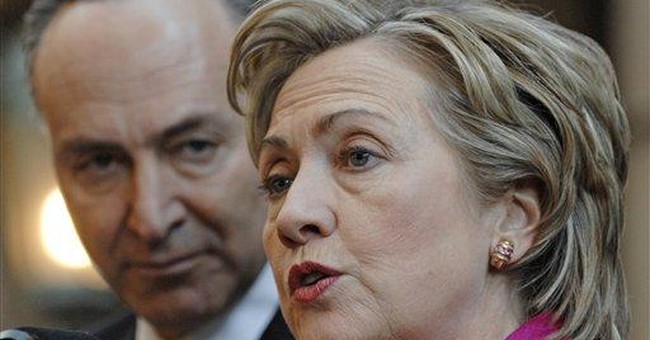 The Democrats who now control Congress want to change President Bush's Medicare drug benefit to require government officials to negotiate drug prices with the pharmaceutical companies. Under the current program, competing insurance companies cut the deals and offer coverage to the retired and disabled.

When Bush signed this program into law, it was the biggest expansion of the welfare state since Lyndon Johnson's Great Society. As with all "entitlement" programs, the costs will explode. Tax-financed health programs are always more expensive than promised.

Rep. John Dingell, D-Mich., defends the drug-negotiation proposal, saying, "It will deliver lower prices to seniors, lower prices at the pharmacy and savings for all taxpayers."

At first glance the idea makes sense. Instead of multiple companies competing to negotiate drug prices, have one big powerful entity do the negotiating. Wouldn't that lead to lower prices?

It might -- and that's part of the problem. We should be suspicious when someone promises benefits from a government monopoly. Government doesn't produce things. It simply uses force to move things around. So why think that Medicare, hardly a paragon of efficiency, should be given the power to negotiate -- in reality, control -- prices?

Government's clout to negotiate lower drug prices supposedly comes from Medicare's 43 million beneficiaries. According to the theory, drug companies will have little choice but to submit to the government's demands because having their products excluded from the program would be self-destructive.

But there are problems with that theory. First, the government doesn't know what the "right" price is. In the real world, prices are set by supply and demand. Government is not part of the marketplace and would have no competitors. Its attitude would be "take it or leave it."

The story won't have a happy ending. A lot of money is needed to develop medicines. Getting a new drug through the FDA labyrinth to consumers takes $1 billion. Most drugs in the research pipeline never even get that far. It's a failure-intensive business.

The occasional success makes it all worthwhile.

So when the government uses its muscle to force prices to sub-market levels, the drug companies will develop fewer life-saving drugs. We will suffer more pain and live shorter lives.

Medicare participants probably won't even have access to some drugs that are already developed. To see this we need only look at the Department of Veterans Affairs. I happened to have lunch with Sen. Hillary Clinton recently. When I went into one of my usual libertarian rants about free markets, Ms. Clinton cited the VA as an example of government success. Indeed, under her husband's administration, the Veterans Health Administration came to provide the "best care anywhere," according to The Washington Monthly. Great.

But government monopolies like the VA never embrace innovation in the same way the private market does. And sure enough, the VA now rations drugs. If you are a VA patient and you need a new and expensive drug, you can't get it. Writes Sally Pipes, president of the Pacific Research Institute and author of "Miracle Cure: How to Solve America's Health-Care Crisis and Why Canada Isn't the Answer", "Only 19 percent of drugs approved by the FDA since 2000 are listed on the VA formulary, and only 38 percent of drugs approved in the 1990s are listed. ... ".

In other words, the department keeps a rein on costs by withholding drugs from veterans.

The giant Medicare drug program, which created the cost problem the Democrats say they will solve, shouldn't have been created. We ought to get our drugs through the private marketplace or from private charities. If government must be involved, at least let it be through the states so they can compete against each other.

The last thing we should do is give federal officials more power. When government controls prices, it must eventually ration supplies. Consumers suffer. When the product is medicine, the results could be catastrophic.