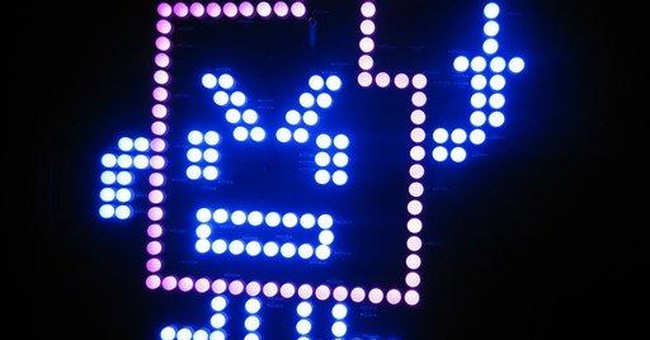 A few weeks ago, men working for an advertising agency installed light screens in cities to promote a Cartoon Network program.

No one seemed alarmed by the signs featuring cartoon characters flipping the bird -- until suddenly, weeks after the promotion began, the Boston police decided the city might be under a terrorist attack. They rushed to collect the devices -- bringing parts of the city to a standstill.

The first was found at an interstate ramp, the Boston Globe reported, "forcing the shutdown of the northbound side of the Interstate and tying up traffic for hours. The State Police bomb squad blew the object apart with a water cannon. . . . Then, in quick sequence . . . reports of similarly suspicious devices flooded police lines, sending anti-terrorism forces to over a dozen locations."

The news media went wild, with television stations interrupting programs for alerts, and breathless TV reporters talking about the "terrorism threat." This went on all day.

Turner Broadcasting, owner of the Cartoon Network, apologized to the city, but Boston Mayor Thomas Menino wants the FCC to revoke Turner's license for its TBS station.

"It is outrageous, in a post-9/11 world, that a company would use this type of marketing scheme," Menino said.

After the "perpetrators," two young men who'd been paid to promote the cartoon show, were arrested, the TV stations aired comments like, "I can't believe someone would be so stupid as to do that." And, "They shouldn't lock them up forever, but they should lock them up for a long time!"

Why are the "perpetrators" the stupid ones? Why don't the media rant about how stupid Boston's authorities were to shut down the city because they thought light screens were a terrorist plot? And why does the Boston Globe write about "enraged" city officials rather than "foolish" officials?

After all, the signs were installed three weeks earlier in nine other cities, including New York, Philadelphia, Chicago, San Francisco and Los Angeles. Authorities there didn't freak out. The Associated Press reported, "There were no immediate signs of anyone panicking . . . removal of the signs was low-key. . . . "

Only in Boston was there panic.

Mayor Menino said more than $500,000 was spent to send dozens of federal, state, and city bomb and terrorism experts to investigate. But he blamed the young men, not himself.

The Boston Globe reports, "Turner Broadcasting acknowledged that it never sought approval or alerted authorities that it would put up the signs."

Good lord, if advertisers now have to apologize for not seeking prior approval from authorities for putting up signs, what have we come to?

One of the men charged, Peter Berdovsky, said, "[It's] kind of ridiculous that they're making these statements on TV that we must not be safe from terrorism, because they were up there for three weeks and no one noticed. It's pretty commonsensical to look at them and say this is a piece of art and installation."

Terrorism is horrible, but your chances of dying in a terrorist attack are relatively low. You're more likely to be killed hitting a deer with your car. (Two hundred Americans die on average every year from car collisions with deer. Including the toll from 9/11, the average number of Americans to die each year from international terrorism since 1981 is 145.)

Excessive fear of terrorism hurts Americans, too. After 9/11, many people chose to drive rather than fly, leading to 1,000 additional deaths in automobile wrecks.

Boston's crazy reaction reinforces the theme I've been sounding in recent columns: Decentralization of authority is always better than centralized power. Imagine if the federal Department of Homeland Security imposed procedures on all cities for when suspicious devices are spotted. The whole country might have come to a standstill.

Instead -- thank goodness -- cities and states can establish their own procedures based on their own knowledge and experience. If Boston's procedures cause the city to panic and shut down, at least New York's and L.A.'s don't.

That's the beauty of federalism.