My Secret Chart Shows the End is Nigh for Obama

Change can be a good thing; or, as we have all found to our sorrow, it can be a bad thing.

In the stock market, volatility is often a precursor to a change of direction in the market, either up or down.

And oh, man, has volatility been defining this market for the last six months, especially since the debt debacle heated up in the US and Europe late this summer. This really has been the summer of discontent.

The market measurements of volatility represent the price of stock investments.  But underneath that measure is the sum-thinking of real people who act and react to real events. They react to debt deals, jobs plans, tax increases- real, imagined and Fantasy Island- the price of milk at Safeway and the price of gas at BP.

And sandwiched somewhere in there is politics, because politics will never be denied its due. Politics is about to change in a big way too. In fact, it’s the political change that will allow the markets to finally break free again.

I’m going to hit some technical topics regarding investing here but, as I suggested, there is a political point at the end, so bear with me. It might even help you be a better investor.

What the chart above shows is the S&P 500 Volatility Index for the last year.

I was speaking with a friend who I will call the Most Bullish Man in America (MBMA).

And he’s really, really worried about the market.

His actions- and the actions of people like him- are pushing the fear index higher and that’s a good sign. When bullish folks like my man, MBMA, can see nothing good in equities, that’s about the right time to jump in to stocks. It means that the last bull has been converted to a bear.

And that’s usually a signal that the market is about to change direction for the better.

All the weak money at that point is out of stocks. That means that barring a huge 100-year disaster, like a world war, civil war, etc, that there is money ready and waiting in other investments. Egad, I’m a heretic for saying this out loud to the Paulists out there, but gold, for example, could move back into stocks.

Conversely when the last bear is converted to a bull, and the fear index is low, then that’s a sign to exit stocks stage right.

The same can be said for real estate. Where was the market going to find additional money to push real estate prices higher when you are loaning money to everyone, including people who have no job, no income and no credit?  The fear index in real estate was pretty low back then.

But volatility in and of itself only signals, the theory goes, a change of direction, not the direction itself. The high fear index here means that people are voting every day for change, at least in the market. It doesn’t tell us what kind of change we’ll get.

But how else can people vote for change? Of course, in the voting booth. And we know what kind of change we’ve had since the 2008 general election. With the recent pick off of NY-09 by the GOP- a safe Dem district- it looks like conservative change is accelerating.

Readers who have been following me for a while know that I have in the past argued that a correlation exists between the presidencies of Jimmy Carter and Barack Obama. I’ll leave it for a different day to make the policy and leadership comparisons between the two. But since the White House seems so offended by it, I’ll also recommend Ron Suskin’s book about the ineffectual leadership of Obama.

For now, though, I’ll trot out a pair of market charts that show the market relationship between the two hapless presidents in terms of historical stock market action. Readers of the column will be familiar with the chart: 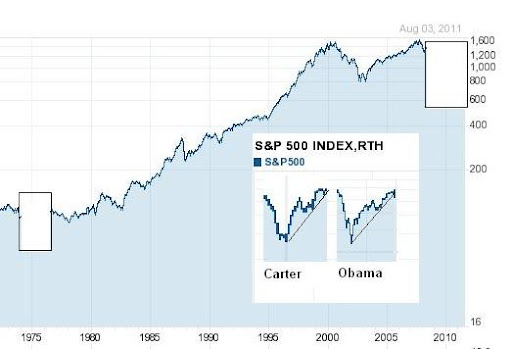 The market action during Obama’s presidency and Carter’s presidency look remarkably similar.  Critics will say that they were victims of policies that started way before them. True enough. But neither did anything to change the trend and it ended badly for one.

We’ll see what happens on Obama. LBJ moved us right with Nixon; Carter moved us righter with Reagan; and I think Obama will move us righter still with…well, my charts can only tell me so much.

The trendline on the S&P charts below would also suggest that the market is entering a period not unlike that from 1971 to 1973 when the market attempted to break above the trend, but instead traded sideways for the next 9 years.

The chart puts in perspective the long range nature of how markets react to events and federal policies. Rather than being drivers of events, the markets are just reflections of things that are going on in society at large.

The period from 1966 to 1982 below is a good example of that. It looks like the economy was on drugs during that period, until the recovery began when it just said "no." The drug of choice of course was dollars and government spending. It took another 12 years for the economy to revert back to normal growth. Since 2000, the economy and the markets have been subjected to depressed growth. The recent up-tick in volatility is an indication of general dissatisfaction with economic, policy and societal direction. It also indicates that we’re having a conversation about those things. Conversation precedes change.

The conversation right now, measured by volatility, is ominous for Obama, but good for the market.

I would make the argument that Obama and Carter were both attempts by the country at change that didn’t work, as I think Obama is even starting to acknowledge:

“I think one of the criticisms that is absolutely legitimate about my first two years,” says Obama in the Suskind book, “was that I was very comfortable with a technocratic approach to government … a series of problems to be solved. … Carter, Clinton and I all have sort of the disease of being policy wonks …”

Except that Clinton was a much better politician than either Obama or Carter. The O&C are both true believers in their creed, to the detriment of the country. The problem with both of them is that you can’t tell either one of them a damn thing.

As Obama sticks to things that don’t work, we’re finding economic and statistical evidence that people are becoming more restless.  It’s expressed in volatility in the markets, economic malaise and drooping consumer confidence.

And that’s about to change.

According to the Wall Street Journal the long-term case for the stock market- again a proxy for economy, ergo society- is good.

"People ought to take a longer view and think in terms of years and even decades," Prof. Richard Sylla of New York University's Stern School of Business, who the Journal says correctly predicted the lost decade of the 2000s.

"Most people are quite pessimistic right now. I am saying: The market may go down from here. It may go up. But if you look at the long sweep of history, this seems like a good time to buy because the average return is down near the bottom."

Sylla’s prediction is that we are near the bottom of the down cycle and over the longer term stocks should start to move back up.

And that’s what I think the market volatility is telling us. And in the process of reverting back to the norm, Obama’s stock will continue to crash.

I’ll leave it to progressives to try to argue that Obama is the new normal.

The volatility index, however, argues for change over time

And as Mark Twain noted: "History doesn't repeat itself, but it does rhyme." 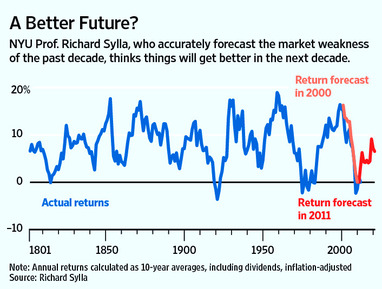