She Turned Him into a Newt 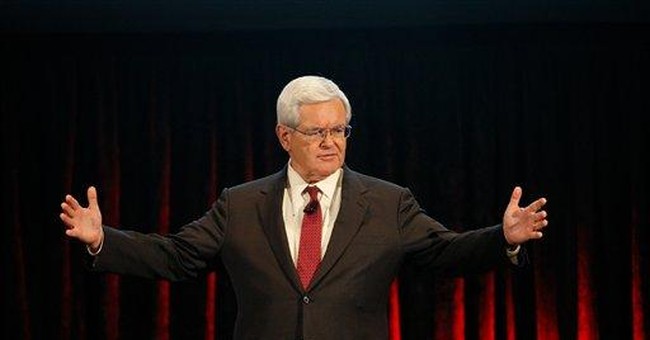 The biggest problem with Newt Gingrich has always been that he’s Newt Gingrich. And, as the Monty Python joke goes, he hasn’t gotten better yet.

Both have the massive egos and the big intellects. The combination tricked them into the conclusion that most problems have sophisticated solutions that only their minds could bring to bear.

It was in believing it.

For Gingrich, social engineering is supposed to be non-partisan.

For Newt, any solution is OK as long as it’s Newtonian, as much as Bill Clinton relied upon only solutions that were Clintonian.

Don’t like Big Labor? Let’s give free trade a try.

Don’t like Obamcare? Let’s give individual mandates a try.

In gauging their support for an idea is the important thing is whether or not they can exploit the idea themselves.

There’s a certain consistency, though, in their inconsistency, which can only be measured by the size- or lack there of- of their own egos.

As Richard Cohen accurately notes: “There is more than a little Richard Nixon in Gingrich - the same lack of place, the same keen intellect, the same petty fights and imaginary enemies, the same hallucinatory grievances, the same willingness to lie, exaggerate and smear. On a given day, Gingrich could be a brilliant President. On any night, he could be a monster.”

Today the monster says that he’s reaching out to Paul Ryan to try to make amends with him about the budget fracas.

But it won’t be flowers in Gingrich’s hand, but rather a pitchfork and maybe a torch.

Populist exploiters like Newt would be nothing without the torches and pitchforks.

“I have since signed a pledge…pledging to repeal ObamaCare,” he added. “I am reaching out to Paul Ryan. My hope is to find a way to work with the House Republicans,” says Matt Lewis of the Daily Caller.

Now we know why John Kerry is in Pakistan.

Here’s a flip-flop that even he couldn’t figure out.

It’s easier for Kerry to secure Pakistani cooperation in the hunt for terrorists than it is securing Newt’s cooperation in solving the budget problems the country faces.

Hopefully Gingrich saved the bunting from the announcement he made five days ago that he was running for president.

You know? The announcement when he was surrounded by family and friends and cheering supporters?

Think of how much more classy Twitter would have made the Gettysburg address:  "4score & 7 yrs ago ;-)"

Then Newt announced again that he was running for president via video surrounded by a black and gold backdrop, kind of like Emperor Palpatine in Star Wars.

And after five days of campaigning, Newt has only one more announcement to go:

“Gingrich, Party of One? Your table is ready.”