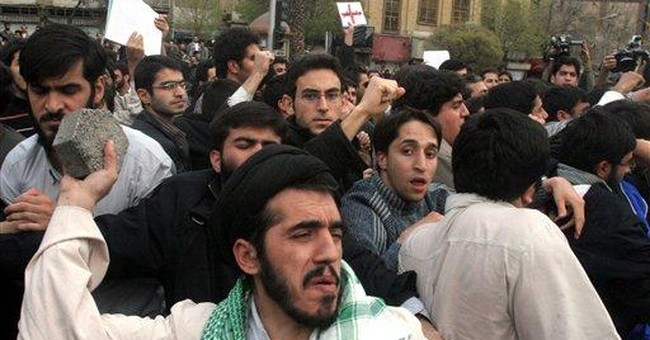 There’s a common phrase used throughout the US military, BLUF. Bottom line, up front. While I’m not a fan of the service’s irritating habit of attaching an acronym to everything, I do like how BLUF cuts through excessive verbiage and unnecessary rhetoric. Those four letters simplify things, and as another four-letter military acronym will tell you (KISS: Keep it simple, stupid!) simplification is key to victory.

So when you're talking Tehran, the BLUF is this: Iran, for all their blustering, is nothing more than a paper tiger.

A few months back, Iran announced a brand new fighter aircraft, the Saegheh (Lightning). Normally that type of story is ho-hum in the defense and security community, as the development of new military hardware is a fairly routine occurrence-- news-in-brief material at best. The Ayatollah’s P.R. machine understood this, so they embellished, claiming that Iran’s first domestically manufactured fighter aircraft was “more powerful” than the American F/A-18 Superhornet.

Thus, the propaganda message that Iran was trying to send was delivered via global media: “We can manufacture fourth-generation fighter aircraft, and we can use them to defend our airspace.”

Of course on closer examination, the Saegheh turned out to be a piece of junk left over from Vietnam-- a modified version of one of the F-5 Tigers that we sold Iran before the fall of the Shah in 1979.

And that story, in a nutshell, exposes Iran’s utter impotence on the world stage. They desperately want to be a global player-- the alpha-male in the Middle East, a political and military force to be reckoned with. But, because they lack that type of reach and influence, they lie and exaggerate to make their dreams of hegemony appear more real.

Their snatch-and-grab of 15 British military personnel wasn’t so much a seizure of sailors as it was a kidnapping of headlines. Past experiences, such as the first Iranian hostage crisis, the Chinese spy-plane incident, and the North Korean attack on the USS Pueblo, have taught the Iranians that we will not go to war over a few captives, but will instead negotiate for their release. Through that calculus, Iran can pull stunts like the British Sailor incident without tangible (read: military) repercussions. It allows Iran to project strength, or at least the appearance of strength, by sending the message: “We can kidnap Coalition troops, and we dare the West to stop us.”

True global players do not have to engage in such theater to prove their power. Iran does because Iran is weak. The most resistance they can muster to the hundreds of thousands of Coalition troops surrounding their borders (Afghanistan, Iraq, Turkey) is some low-level warfare in Iraq and grabbing a handful of lightly armed sailors from a dinghy.

That’s why their nuclear weapons program should be of such concern to the west. An atomic Iran allows the Ayatollahs to back their blustering with a credible nuclear deterrent. And while Iran is pathetic through the lens of a state-versus-state paradigm, they have mastered the cruel disciplines of terrorism and its asymmetrical cousins.

From the terrorists in Iraq to the jihadists in Gaza to Hezbollah in Lebanon, all roads of terrorism lead to Tehran. Imagine how far they would be willing to spread the revolution, knowing that they lived under the protective umbrella of a nuclear deterrent. Think Cold War Russia, spreading the communist ideology to all corners of the globe, knowing that as long as they could hold the West at risk with nuclear weapons, military reaction would be limited.

The future could witness American troops fighting Iran-backed jihadis in the Horn of Africa, the Philippines, the Middle East, even the West, with the West, ironically, paying the bills by purchasing Tehran’s oil.

It would be World War by proxy, just like the Cold War, within a new paradigm of global insurgency, where Iran funds and fosters an Iraq-style insurgency in any theater that is ripe for that brand of revolt. It's a simple concept-- the more of America's resources that Tehran can tie up fighting in other areas, the fewer resources America has available to attack the source.

So, if Iran does manage to develop nuclear arms, would they be crazy enough to use them? Some say yes, pointing to President Mahmoud Ahmadinejad’s frequent use of apocalyptic rhetoric. Some say no, pointing to Iran’s tendency to talk the talk, but not walk the walk. I happen to agree with the latter.

Dictators, autocrats, and theocrats all value their power and the preservation of that power above all else-- even if they do happen to think that they are one Tomahawk strike away from 72 virgins. That’s why you don’t see high-ranking Mullahs detonating themselves in Israeli marketplaces. Martyrdom is for peasants.

The real threat is in the deterrence. With Iran’s blustering backed by nuclear weapons, we can expect to see more kidnappings, more terrorism, and more carnage. An emboldened Tehran would feel perfectly comfortable escalating global terrorism to frightening levels, turning relatively benign areas of operation into new, individual Iraqs.

Right now, only two nations seem to understand this-- America and Israel. And while it’s likely that one of the pair will turn Iran’s nuclear program into a pumpkin before the clock strikes midnight, that does not mean that we can afford to twiddle our thumbs as the paper tiger becomes a real tiger.