They know so much that isn't so 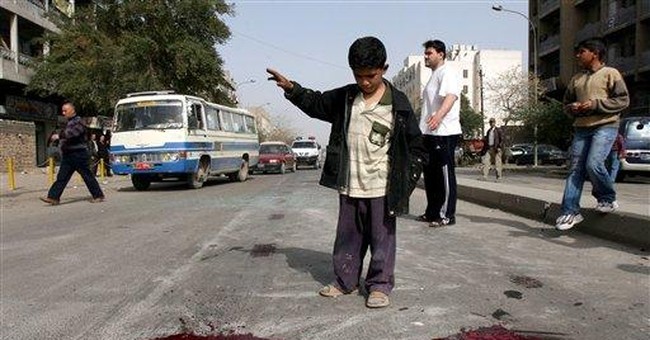 Sometimes I read liberal blogs. Not for education, of course. I suppose I read them as some sort of perverse method of reinforcing my convictions on the war. Ronald Reagan used to say "it's not that liberals are ignorant; it's just that they know so much that isn't so." It's a bit of wisdom that is most effectively illustrated by the left side of the blogosphere.

This war has become, by and large, an exercise in politics. "Warped Clausewitz" is a good way of framing it. In Clausewitzian theory, war is conducted by a trinity of the people, the military, and the government, all interconnected and functioning as a single-minded entity in pursuit of a single objective: victory.

Today the trinity is fractured. Some would argue that it fractured when we withdrew from Vietnam. But losing South Vietnam didn't have the same horrific implications as losing Iraq to Iran, nor did we have to worry about Saigon becoming the capital of a breeding-ground vacuum state.

And, we aren't conscripting a largely disgruntled pool of unwilling draftees to fight the war in Iraq like we did in Vietnam. All are volunteers. So why has 21st-century America shattered the trinity when we need it most?

True to Clausewitzian thought, the answer lies in the political realm. Opposition to President Bush has become downright religious for some Americans—activists whose greatest fear is that victory in Iraq would be tantamount to justifying the whole invasion and occupation.

Thus leftist pundits erect pyramids of anti-war rhetoric, built on falsehoods, misconception, and doubt—constructs that serve as pillars of justification for a hasty retreat. None of it is built on sound military judgment or expertise, which should be a requisite for respected war punditry, but like Ronnie said, "they know so much that isn't so." And, there's nothing left-o'-center bloggers love more than to show off that knowledge.

Take Juan Cole for example. Cole is a prominent liberal blogger and a professor at the University of Michigan. Recently he reported on his blog, titled Informed Comment (without a hint of irony, no doubt), that the U.S. Air Force:

…launched a series of bombing raids on southeast Baghdad. This is absolutely shameful, that the US is bombing from the air a civilian city that it militarily occupies. You can't possibly do that without killing innocent civilians, as at Ramadi the other day. It is a war crime. US citizens should protest and write their congressional representatives. It is also the worst possible counter-insurgency tactic anyone could ever have imagined. You bomb people, they hate you.

Not if you're bombing the folks who are trying to kill you, as the Air Force is doing by targeting Al Qaeda Iraq with a healthy dose of precision-guided justice. Then people like you. A lot. In fact, an Iraqi blogger e-mailed me a photo that he took of a B-1 bomber running a combat air patrol over Baghdad, curiously wanting to know what it was, and whether or not it would help with the surge. That's right—Iraqis are so terrified of these bombing raids that they're outside taking pictures of the strike aircraft.

Prof. Cole is doing something that many anti-war bloggers do—pretending that they are someone they aren't, writing on a topic that that they know little about. Cole is a professor of Middle Eastern studies, and is no doubt expert in that discipline. But his writing implies that he has some sort of expertise on counter-insurgency that trumps that of the career military officers who ordered the aforementioned air strikes.

You ask a career military officer and they'll tell you that using precision guided munitions is one of the best ways possible to minimize civilian casualties and collateral damage, while still effectively negating a target. Ask Juan Cole and he'll make it seem like the U.S. Air Force is indiscriminately carpet bombing Iraqi neighborhoods for a giggle. "They know so much that isn't so."

On Monday, USA today front paged news that the 2nd Brigade of the 4th Infantry Division and the 4th Stryker Brigade would be bypassing the usual pre-deployment counter-insurgency training at the National Training Center (NTC) so that they could more rapidly support the recent troop surge.

Blogger John Aravosis hyperventilated over this news on AMERICAblog, another popular blog opposed to the war in Iraq, suggesting that Iraq war supporters "hate the troops but love the war."

An informed commentator, well-versed in military knowledge and thought would rationally tell you that these two particular units are already seasoned veterans of the war, and come from home bases (Forts Campbell and Stewart) that boast two of the world's finest MOUT (military operations on urban terrain) facilities.

That is the reason that the Pentagon feels comfortable in accelerating their training. John Aravosis, not well-versed in military knowledge or thought, would have you believe that inexperienced kids are being heartlessly shipped into a meat grinder without proper training or equipment. "They know so much that isn't so."

These are two relatively benign examples from the liberal blogosphere, a place whose terrain cracks and oozes with emotionally driven hatred masquerading as political discourse. A place where the mere thought of victory in Iraq is downright blasphemous. But they do effectively demonstrate how anti-war bloggers and pundits will try to second-guess and sabotage the Pentagon's every move by pretending to be military experts.

Surely Clausewitz never anticipated that an active percentage of his trinity would be working towards achieving the enemy's vision of victory, but perhaps that's the most compelling evidence that the trinity has fractured once and for all.