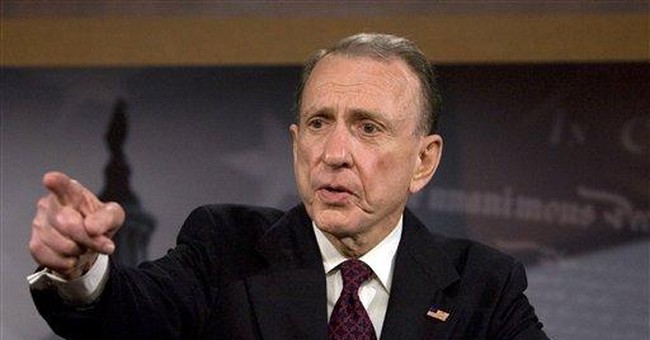 "So did you hear about Arlen Specter?" Inside the Beltway asked Sen. Diane Feinstein, California Democrat, as she was enroute to the Senate floor on Tuesday.

A puzzled look crossed her face.

A huge smile crossed her face.

"I think it's teriffic. Maybe now we'll get the votes we need."

Or so read an early copy of Sen. Kirsten Gillibrand's news release on Sen. Arlen Specter's decision to jump the Republican Party ship. She misspelled the Pennsylvanian's name an additional four times in the statement.

Then again, the Democratic senator from New York - and many on her staff - are new to Capitol Hill, given she was recently appointed to fill the seat of former Sen. Hillary Rodham Clinton.

We told you earlier this week about Washington's upcoming inaugural juried political film festival, Politics on Film, and now we've obtained the final list of domestic feature films chosen from among the more than 100 submitted.

Without further ado, the 2009 screening selection for the May 7-10 festival:

1. "The Response:" A courtroom drama based on transcripts of the Guantanamo Bay military tribunals.

3. "Cult of Personality:" A review of the 2006 New Orleans mayoral election, called the most important race for mayor in the history of New Orleans and one of the most unusual elections in the country.

4. "Neshoba:" The story of a Mississippi town still divided about the meaning of justice, 40 years after the murders of civil rights workers James Chaney, Andrew Goodman and Michael Schwerner.

5. "The Other Side of Immigration:" An attempt to explain why so many Mexicans come to the United States illegally and what happens to the families and communities they leave behind.

6. "The Reckoning:" A film that follows an International Criminal Court (ICC) prosecution team for three years across four continents as it issues arrest warrants in Uganda, Congo and Colombia, culminating in the arrest warrant for the Sudan'sPresident Omar al-Bashirfor war crimes in Darfur.

7. "Sprawling from Grace:" An exploration of the unintended consequences of suburban sprawl and the importance of altering current development trends.

8. "What's the Matter with Kansas?:" An account of a group of Kansas conservatives as their fortunes suddenly decline - their candidates lose elections just as their church splinters, moves to an amusement park, and, when that fails, a Best Western motel.

The festival will award prizes in four categories: feature film, documentary film, international film and political advertising. Screenings will take place at locations that include Landmark's E Street Cinema near Penn Quarter and the Marvin Center Amphitheater on the George Washington University campus.

"Perhaps you have heard, or will hear, about two demonstrators dangling themselves and a 'greenhouse' sign from a construction crane on 23rd Street NW, just south of the State Department," Washington resident John Lockwood writes to Inside the Beltway

"It seemed an odd way to fight pollution. On my bus and the others, we finally had to get out and walk the rest of the way - an odd way to build up political support. As I walked a mile and more through the humidity, I reflected that the greenhousers' hadn't lost my support, since they never had it anyway. In the high holy Church of Greenhousery, I am an atheist, or a heretic."