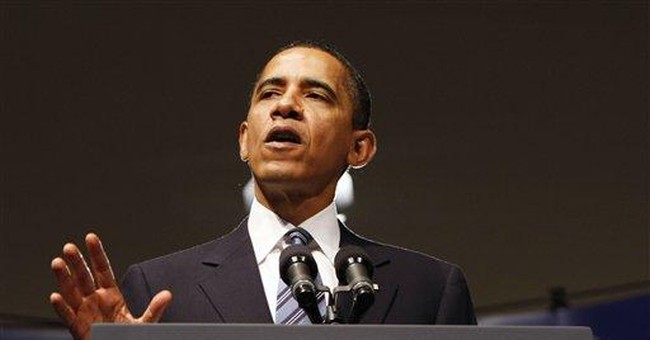 Why all the fuss over President Obama's first 100 days in office, a milestone to be marked Wednesday?

Consider there are 1,360 days left in his presidential term - 2,820 "Obama days" remain should he get elected to a second term - which is certainly more than enough time to accomplish all this "change."

Bottom line: Mr. Obama has been busy emulating President Franklin D. Roosevelt's first 100 days in office, which historians all agree built the foundation for FDR's legacy. Like Mr. Obama, Roosevelt was confronted with the most severely depressed economy of his lifetime, a crumbled stock market and increasing unemployment.

Thus, like Roosevelt, Mr. Obama has in just three months' time set out to reform banking and industry, through the use of the budget, the tax code and the federal regulatory apparatus.

If Mr. Obama's drastic measures and policies prove successful, as did those implemented by the nation's 32nd president, the economy will rebound. The president's supporters insist they see light at the end of the tunnel, but conservatives and even socialists warn that his economic policies already show signs of failure. Stay tuned.

Speaking of President Obama's unprecedented spending habits, Sen. Orrin G. Hatch of Utah has just introduced the Limitation on Government Spending Act of 2009, which - as the name suggests - would cap the amount of government spending in relation to the nation's gross domestic product.

All told, the Republican's bill would limit federal spending to 20 percent of GDP.

In the meantime, the senator remains fearful that the Democratic president will continue to spend while "disregarding the future consequences." That said, he sees fit to quote Mr. Obama's political idol, Abraham Lincoln, who said, "You cannot keep out of trouble by spending more than you earn."

It's no secret that Abraham Lincoln was President Obama's favorite president. Mr. Obama has said as much numerous times.

It so happens that in the not-so-distant days when he was a freshman senator from Illinois and the going would get tough on Capitol Hill, Mr. Obama would sneak away from the U.S. Capitol, make his way to the other end of the Mall, and find a much needed reprieve sitting on the steps of the Lincoln Memorial - remembering "all the hard times that this country has gone through," he recalled recently.

A few weeks ago, you'll recall, Mr. Obama took his family to see Lincoln's memorial. Given the nation's difficult times, it will be interesting to see when he next returns.

The money chase by political action committees continued its upward climb in 2007-2008, raising $1.2 billion, according to new figures from the Federal Election Commission.

That said, Inside the Beltway has obtained a pair of Top 10 lists identifying the country's leading PACs during the last election cycle, starting with "receipts." The wealthiest on the list is ActBlue, the nation's largest source of funds for Democrats; followed by MoveOn.org; the Service Employees International Union Committee on Political Education; the pro-choice group Emily's List; the Fred Thompson PAC, the actor and former Tennessee Republican senator's PAC is valued at more than $24.5 million; the American Federation of State County and Municipal Employees; the National Rifle Association of America Victory Fund; the National Association of Realtors PAC; the International Brotherhood of Teamsters' Democrat Republican Independent Voter Education; and finally, the Service Employees International Union.

An Orlando Sentinel cartoon published on the op-ed page of The Washington Times was attracting plenty of attention at CIA headquarters Monday, Inside the Beltway was told by a high-ranking official at the spy agency.

In the cartoon, President Obama, clutching a sheaf of papers that say "Torture Memos Public," tells a CIA officer donning a trenchcoat, "I've decided not to prosecute you for helping to keep us safe since 9/11."

The CIA officer did not appear to be amused ... or reassured.