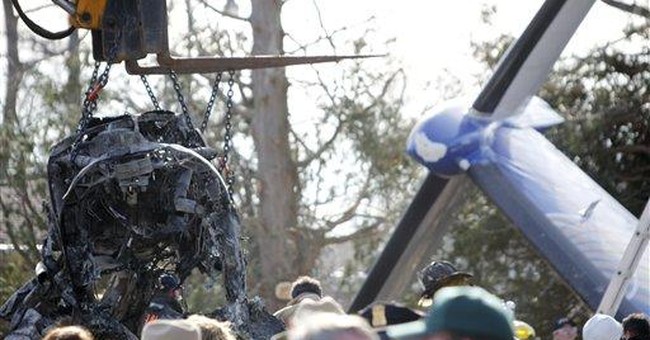 Yet, on that tragic day, when 50 people lost their lives, an estimated 117 Americans died on the nation's highways.

Mark V. Rosenker, acting chairman of the National Transportation Safety Board (NTSB), which continues to investigate last week's airliner crash, reminded a recent audience in Arlington that the “vast majority of transportation fatalities - in fact 95 percent - occur on our nation's highways. By comparison, we would have to have a commercial airline hull loss every day for aviation fatalities to match those of highway.”

There are more than 42,000 U.S. highway fatalities annually.

Now that “change” has come to Washington, New York Rep. Jerrold Nadler says “in 2009 we should be ready as a society to acknowledge that stable American families come in all varieties.”

His proposed legislation would allow gay Americans to sponsor “permanent partners for legal residency in the United States,” a right now allowed only to married heterosexuals under immigration law.

“Because the U.S. does not legally recognize [homosexual] couples and their children as families, many same-sex binational couples are subsequently torn apart,” complains the Democrat. “Any committed couple deserves the potential to form a life and a family together ... and whether that couple is gay or straight should be irrelevant.”

We're not sure whether corsages are in order, but get ready for the formal “Capital Queer Prom” in Washington.

Homosexual, bisexual and transgender adults will be boarding the good ship Spirit of Mount Vernon to attend the prom on Saturday, March 7.

“It's a second chance to have the prom you should have had years ago,” insist organizers, who promise “a safe environment that allows attendees to relive such a coming-of-age experience with their partners and friends without any judgment.”

Tickets are $50 and include “a moonlit cruise along the Potomac River, heavy hors d'oeuvres, music and dancing, a silent auction, prom photos, voting for prom king and queen, an after-party ... and other memorable moments.” The event will benefit the local nonprofit organization One in Ten.

We're not sure whether the pontiff would agree, but the president of Catholics for Choice says "Pope Bededict and Speaker Pelosi have much in common.”

Jon O'Brien says this week's meeting in Rome between Pope Benedict XVI and the House Speaker Nancy Pelosi comes at an opportune time with the recent election of President Obama.

He says while it “is true there have been differences of opinion” between the Catholic hierarchy and Mrs. Pelosi on such issues as contraception and abortion, the 2008 elections proved “a majority of Catholics supported the policies that Nancy Pelosi and the Democratic Party represent,” surrounding the economy, poverty, minimum wage, health care reform, child care, and waging war.

As economies crumble around the world, virtually putting the skids on Al Gore's call to curb greenhouse gas emissions, Carl Mortished reflects in the Times of London:

”Like Coleridge's ancient mariner, the nation is becalmed, a painted ship on a painted ocean and we have gone back a century, hewing the same coal that first put Britain on the fast track to the Industrial Revolution. The reason why we are still stuffing black lumps of carbon into furnaces is simple: it makes economic sense and the financial markets are shouting this message louder than ever before.”

”If he wins, that won't be the first time he'll step in it.”

“He looked down, lifted his foot, smiled and shrugged his shoulders to the crowd, which cheered him on,” says one onlooker.

A fifth-generation Alexandrian, Mr. Fannon is hoping to win a seat for Republicans on the currently all-Democrat council.