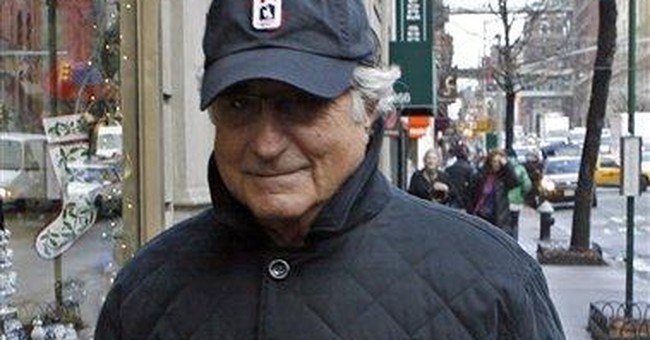 It didn't take a rocket scientist to predict - given Monday's and Tuesday's respective arrests of suspected financial scammers Nicholas Cosmo and Arthur Nadel, which follow on the heels of Bernie Madoff's purported massive Ponzi scheme - that a group of U.S. senators this week would introduce S.331: "A bill to increase the number of federal law enforcement officials investigating and prosecuting financial fraud."

Here it is just one week after the first black president moves into the White House and the Department of Housing and Urban Development announces a multithousand-dollar settlement in a housing discrimination case involving a white family forced to move from their Tallassee, Ala., home after a visit from their black neighbors.

A HUD investigation determined that Melissa Jones and her fiance were standing in their front yard last June talking with their neighbors when their landlords, Wilbur and Julie Williams drove by.

Later that day, quoting HUD, Mrs. Williams called Miss Jones to say, "If y'all want to have African Americans to visit, we're going to ask you to move. We're not having those people at our property ... that's never happened and we're not going to start today with it happening."

Miss Jones and her family vacated the property.

The Secret Service is charged with protecting the life of the president, but it's the FBI that takes the lead in combating terrorism and weapons of mass destruction during major national events, such as last week's presidential inaugural.

We now learn that the Washington Field Office of the FBI had at least 150 plainclothes "teams" mixing with the Jan. 20 revelers around the U.S. Capitol and along the inaugural parade route. "Our eyes and ears on the ground - our trip wires, if you will," explains John Perren, special agent in charge of the office's counterterrorism division.

President Obama has historic reason to warn Americans there won't be any quick fix to the current economic crisis. Consider the latest Harper's Index:

"I probably come at this from a slightly different perspective," Mr. Bartlett of Maryland told the president. "I remember when FDR beat Hoover in 1932. So I remember the Great Depression very well. I don't remember any of the many government programs affecting the course of the Depression. Government programs didn't work then, I don't know why we think they would work now."

(It might have behooved Mr. Obama to quote the late, great journalist H.L. Mencken: "The older I grow the more I distrust the familiar doctrine that age brings wisdom.")

So "are conservatives in the grip of dead ideas?"

Mr. Miller argues that both politicians and business leaders failed to prepare the country for the current economic crisis because they are slaves to dead ideas, including old "notions" that higher taxes hurt the economy and money follows merit.