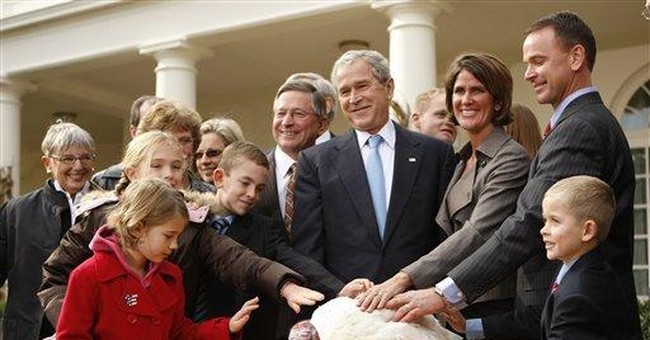 Thanksgiving is over, and soon to celebrate his final Christmas as president, George W. Bush is turning his sights on Texas. But first he has to pass the keys to the White House to President-elect Barack Obama on the steps of the U.S. Capitol. The Joint Congressional Committee on Inaugural Ceremonies educates that following the inaugural ceremony on the west front of the U.S. Capitol, the outgoing President and First Lady traditionally leave the nation's capital "with little ceremony" to begin their post-presidential lives. An 1889 "Handbook of Official and Social Etiquette and Public Ceremonies at Washington" describes it this way: "His departure from the capital is attended with no ceremony, other than the presence of the members of his late Cabinet and a few officials and personal friends. The President leaves the Capitol as soon as practicable after the inauguration of his successor." After all, says the 2009 committee: "In 1798, George Washington attended the inauguration of his successor, John Adams, and several observers noted that onlookers paid more attention to Washington than to Adams." (Unlikely this go-round, given Mr. Obama's extreme popularity.) Here's what our readers will likely see on Jan. 20: Immediately after the swearing-in ceremony, the newly installed president and vice president (in this case Mr. Obama and Joseph R. Biden Jr.) will escort their predecessors (Mr. Bush and Dick Cheney) through a military cordon and out of the Capitol. Ever since Gerald R. Ford's departure in 1977, where the former President and First Lady then climb into a helicopter and fly away from the Capitol grounds, during which the weight of the world - arguably heavier now than at any other time in U.S. history - falls onto the shoulders of the nation's new president. BUY STOCKS When other 2008 Republican presidential candidates donned blinders, Mike Huckabee says he knew the U.S. economy was headed for disaster. "As much as I would have liked to joined in the 'jolly good feeling' that the other Republicans were expressing for the state of all things economic in America ... I said that my friends on the stage must have been talking to a different crowd," the former Arkansas governor writes in his new book, "Do the Right Thing." "The people I met every day serving food, sweeping and mopping, making beds at the hotel, or tagging bags at the airport weren't getting ahead," he points out. During one debate in Iowa, Mr. Huckabee recalls, "Mitt Romney was asked what we could do to help the economy. I stood there in stunned silence when he went into his well-prepared, programmed answer about how we needed to invest more in high-yield stocks. High-yield stocks! "I wanted to scream out, 'Let them buy stocks!'" RUSTED SLEIGH Thanksgiving digested (if not yet, hang in there), we turn our attention to Christmas and the arrival of Santa Claus - unless, of course, the jolly old elf and his team of reindeer are drowned. New York Times best-selling author Christopher C. Horner, who hangs his hat at the Competitive Enterprise Institute in Washington, writes in his latest book, "Red Hot Lies," that the focus of the global warming lobby is to corrupt our children through "scare campaigns," indoctrinating the tots to such an extent that they now blame their own parents for "global warming." Notes Mr. Horner: "Just in time for Noel a purportedly educational tome titled 'When Santa Turned Green' rolled out. 'It's November up in the North Pole and everything's going along smoothly at Santa's workshop until he discovers a leak in his roof. Santa soon learns that this little leak is connected to a far bigger problem: The North Pole is melting because of global warming!'" WHO'S IN CONTROL? "Are we going to let a bunch of Potomac River bureaucrats determine if a radio station in Tomball, Texas is being fair when it discusses politics?" So asks Rep. Ted Poe, Texas Republican, who notes that "some in Congress are trying to call back the speech police and reinstate the Fairness Doctrine," which was abolished several decades ago. The "Broadcast Fairness Doctrine," if reinstated, would see that private radio stations become fair and balanced by airing opposing views of public importance. "Sounds like government control of speech to me," says Mr. Poe, a former federal judge. "It is actually totalitarian state control of speech."

CARTOONS | AF Branco
View Cartoon
A Gaza Building Housing Media Outlets Was Destroyed by IDF. This is Why.
Katie Pavlich