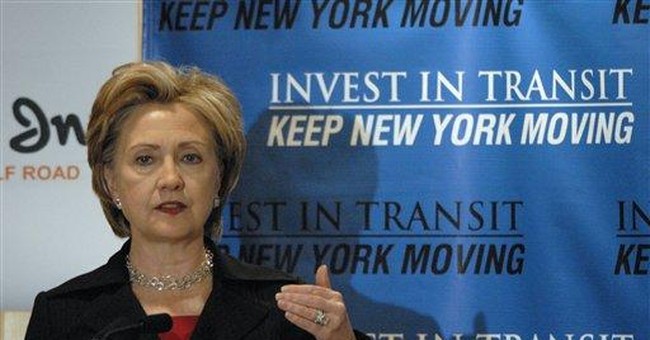 Inside the Beltway is told there is no truth to a rumor that Sen. Hillary Rodham Clinton, upon being approached by Barack Obama to become his secretary of state, pointed out that she could see Canada from her adopted state of New York.

Like her politics or not, "Miss September" Ann Coulter looks amazing in fur.

"Pretty in Mink" is the title of the 2009 calendar of the Luce Policy Institute, an organization promoting smart, conservative women role models.

"We took some of your favorite leaders of today's conservative movement on a journey back in time and made them up into glamorous movie stars of classic Hollywood. Back when the big screen was a little more glamorous, women were a little more feminine, the men a little more charming - and the world a little less politically correct," the institute explains.

Sarah Palin had more of an impact on American men than we realized.

"$1000 Sarah Heath Palin-minded housemate for room with bathroom in Old Town," reads one Craigslist posting by an Alexandria man. "Offered is a spacious bedroom furnished with a queen-size bed, two bedside stands, a linen chest and a wrought-iron floor length mirror. En-suite bathroom has a shower, hand basin and toilet ... No description of me offered 'cause how could it possibly be objective."

After taking New York City and NBC's "Saturday Night Live" by storm, Sarah Palin is being written into Hollywood scripts.

TV viewers who watched the Nov. 17 episode of "Boston Legal" saw Denny Crane (William Shatner) and Alan Shore (James Spader) enjoying their customary evening cigars and glasses of Scotch on the balcony of their law firm while discussing the love of Mr. Crane's life.

"Yes I am. Cruel enough to shoot you if you so much as look at Shirley," Mr. Crane warned.

"I need a new woman to objectify. What do you think of Sarah Palin?" asked Mr. Shore.

"Oh. Those pouty lips. Those down to earth . . . good looks. I've got two things to say about Sarah Palin.

"Do you think we're sexist?"

"What about Shirley and Sarah together?" suggested Mr. Crane.

"Who wouldn't vote for that?"

President-elect Barack Obama pledged throughout his 2008 campaign to step up the search for Osama bin Laden. But is the terrorist mastermind even alive?

Rober Baer, a former CIA field officer assigned to the Middle East and now Time.com's intelligence columnist, posts this latest headline: "When Will Obama Give Up the Bin Laden Ghost Hunt?"

Mr. Baer says the "last relatively reliable bin Laden sighting was in late 2001," opinion echoed by "more than a few" Pakistani intelligence operatives who knew bin Laden and believe he "is in fact dead."

Suggesting subsequent audio and videotapes supposedly of bin Laden are "manipulated," Mr. Baer cites the "mystery as to why bin Laden didn't pop up during the U.S. election. You would think a narcissistic mass murderer who believes he has a place in history would find it impossible to pass up an opportunity to give his opinion at such a momentous time, at least by dropping off a DVD at the al-Jazeera office in Islamabad."

At least three CIA officers on bin Laden's trail since 9/11 also assume he is dead, Mr. Baer notes. And what if that's the case?

"Indefinitely crashing around Afghanistan's and Pakistan's wild, mountainous tribal region on a ghost hunt cannot serve our interests," he writes. "One day Obama will need to give up the hunt - declare bin Laden either dead or irrelevant. He has more important enemies to deal with, from Iran to Russia."