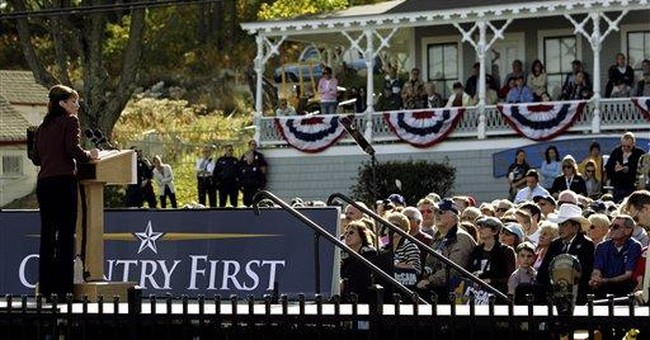 "Team Sarah members fought back into the wee hours of the morning, reporting and banning the offenders. At one point, the chat room had to be shut down temporarily," said one member.

Those were Silver Owls, or senior members of the National Press Club, holding their annual Fall Hoot Thursday night, inducting TV commentator and humorist Andy Rooney into the "Order of the Owl" - recognizing "birds of a unique species, weathered and wise, who have nested at the National Press Club and demonstrated that they give a hoot for Washington journalism."

Hopefully, when Americans awaken Nov. 5, they will know who will be the next president of the United States.

And nobody better to discuss Election Day and its aftermath that Wednesday - appearing side by side, no less - than the respective chairmen of the Democratic and Republican National Committees, Howard Dean and Robert "Mike" Duncan.

The pair of party leaders has agreed to appear together at a National Press Club luncheon, when only one of the two gentlemen will be grinning from ear to ear.

WHAT DO YOU KNOW?

Get a load of this contest: AmericasTrueNews.com will pay cash bounties of up to $50,000 to those who can offer verifiable facts about the presidential candidates.

The Web site is offering $200 to those who e-mail previously undisclosed facts that can be verified and are then used on its site.

In addition, $1,000 will be sent to anybody who can prove that the information posted on the site is verifiably wrong.

However, the Web site will pay as much as $50,000 to the person who can make a claim on its "Knock Out Challenge" - verifiable information that stops either Democratic or Republican presidential campaigns in their tracks with news so stunning that it makes the election a foregone conclusion.

We see that the makers of the Obama Underwear line, Andrew Christian, created a viral video where superhero "Obama Man" saves the damsel in distress, Sarah Palin.

The underwear named for Democratic presidential candidate Barack Obama is now on super sale at only $7.95. Mr. Christian produces contemporary collections of urban inspired menswear that can be found in exclusive boutiques around the world.

Surrounding the latest sex scandal to rock Capitol Hill - Democratic Rep. Tim Mahoney of Florida purportedly engaging in sexual misconduct with one or more women, one of whom he is said to have bribed with $121,000 - and whether Democratic leaders knew of the unethical behavior beforehand but sought to keep it quiet - Sander Fredman of Leesburg, Va., writes:

"We have enough schadenfreude to be served in a bipartisan manner. If it hasn't been introduced, I propose the term 'Hastertgate' or if it's too late 'Emanuelgate.' The definition is: 'A leader of one's party who might have known of some wrongdoing of one its members, but kept his/her mouth shut.' "