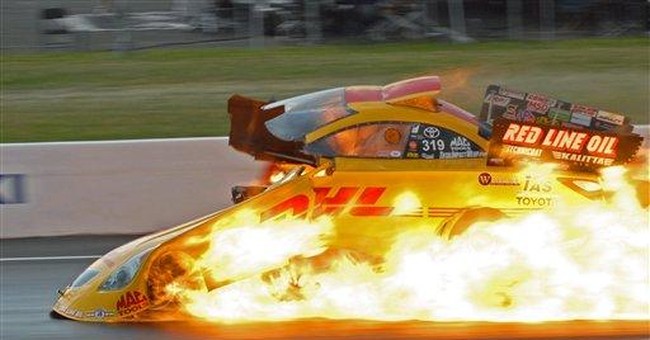 "Well, we voted on monkeys. Yes, we voted to prohibit you from driving a monkey across state lines," the none-too-pleased congressman informed the country.

He will remain in his post as director of the Central Intelligence Agency, but after nearly 40 years of active military duty, a retirement ceremony was held Friday for Air Force Gen. Michael V. Hayden.

Gen. Hayden occupies "one of the most critical positions in the country today" and his military retirement "does not mark the end of a career," stressed Defense Secretary Robert M. Gates at the Bolling Air Force Base Officers' Club.

Mr. Gates who, like the retiring general, served in the Air Force before becoming CIA director in 1991 lauded Gen. Hayden as the "quintessential intelligence professional" who "understands the threats we face and what we must do to confront them."

In the often-thankless field of intelligence, Mr. Gates noted, "when you smell the flowers, you look around for the coffin."

But the defense secretary also called attention to Gen. Hayden's personal side, pointing out that the Pittsburgh native, who left the helm of the National Security Agency (NSA) to become CIA director in May 2006, likes to show up unannounced in the agency's employee cafeteria and "search for an empty chair, not empty table."

Once, Mr. Gates recalled, the CIA director unwittingly sat down in the middle of a baby shower, and by the time he finished his lunch he had offered a few of his own suggestions for suitable baby names.

In a letter to residents of his city, he points out that the 2004 Democratic National Convention in Boston attracted 10,000 demonstrators, and similar "peaceful demonstrations" are anticipated at Denver's Civic Center, Skyline Park and other downtown areas during convention week.

Otherwise, whereas up to 50,000 visitors are anticipated in Denver from Aug. 23 to Aug. 28, that is fewer than the number of people who arrive downtown for a Broncos football game or some Rockies baseball games, sometimes compounded by hockey or basketball games at the city's main indoor arena.

"Denver has hosted games in all three downtown stadiums at the same time, involving close to 150,000 people," Mr. Hickenlooper notes.

Read all about it!

It was perhaps a preview of the Republican National Convention, albeit at the Wardman Park Marriott, where hordes of Republican women ate, drank and listened to first lady Laura Bush before stampeding to grab a signed copy of her new book, "Read All About It!"

Sponsored by the Republican Women's Federal Forum, Mrs. Bush spoke about the purpose behind writing the children's book that focuses on the joys of reading. Surprising everyone, she then introduced the book's co-author, her newlywed daughter, Jenna Hager. Both mother and daughter spoke about their commitment to education and encouraging children to read.

One luncheon guest, LaDonna Hale Curzon, was happily surprised when Mrs. Hager paid her a compliment about her cigar-box purse with a picture of her dad, George W. Bush, on the front.

Back to the book, which is geared for young readers ages 4 to 8, it's about a student named Tyrone who doesn't like to read. You'll have to buy the book to see what happens.

By golly, that's Congress saluting the 50th anniversary of Ben's Chili Bowl along Washington's U Street corridor or, as Rep. Charles B. Rangel of New York prefers, the "Black Broadway."

In 1958, newlyweds Ben and Virginia Ali gave birth to Ben's Chili Bowl, and whereas "many entrepreneurs have come and gone the Alis and that familiar long, white counter with red-vinyl stools have remained stalwart and true," the Harlem lawmaker said.