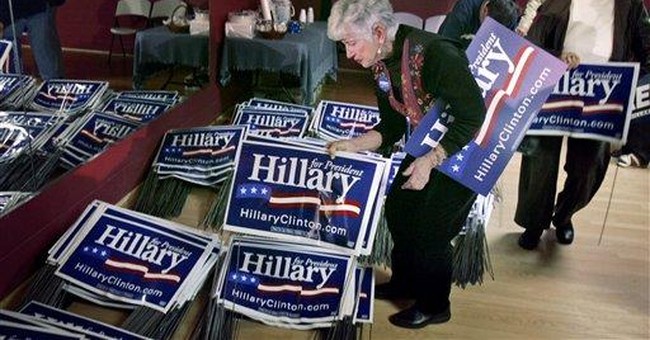 Now, as everybody knows after seven years, when you spell "W" you get "Dubya." Given the initialed nickname for Hillary, we thought it would be fun to spell "H" and see what we came up with.

We don't know about you, but all Inside the Beltway got was an "Ache."

Is anybody keeping a close watch on President Bush?

That's what the popular left-wing Web site True Blue Liberal (www.trueblueliberal.com) wants to know, posting this urgent reminder yesterday from syndicated columnist Ann McFeatters: "Wrapped up as we have been in presidential-election hoopla, machinations and drivel, we have to sober up and realize we still have another year of the Bush administration to deal with."

We lost count of the number of pundits and pollsters who were eating crow yesterday, what with Sen. Hillary Rodham Clinton's surprise victory Tuesday in New Hampshire.

Few were as forthcoming, however, as Peter Wehner, a regular contributor to Commentary magazine:

"It wasn't enough for me to predict, as I did on Monday, that Barack Obama would defeat Hillary Clinton in New Hampshire. Noooo. I had to predict that Obama would sink the Clinton campaign and end the Clinton Era. I even provided a eulogy. About predictions and punditry I can only say, echoing the emotional words of Senator Clinton from earlier this week, 'It's not easy.' But in the best pundit tradition, I'll simply plow ahead, chastened but unbowed."

Retired Sen. Alan K. Simpson was to give the annual Nixon Legacy lecture yesterday on the occasion of the 95th anniversary of former President Richard M. Nixon's birth.

The Wyoming Republican's speech coincided with a formal wreath-laying ceremony — a White House wreath sent by President Bush — at the 37th president's library and museum in Southern California.

Given the library's short 15-minute drive from Disneyland, it comes as no surprise that Mr. Nixon's is the most visited of the presidential centers in America. And certainly one of the most popular attractions in the nine-acre library and museum is the "The Watergate Gallery," which the Nixon center spins this way:

"It describes Watergate as a political struggle between President Nixon and a Democratic Congress, which had strongly opposed the administration's policies in Vietnam during his first term. The exhibit also outlines the other issues with which the president was contending during Watergate, including U.S.-Soviet relations and Mideast peace. Visitors can listen to the key portions of the so-called 'smoking gun' conversation from June 23, 1972, in which the president is first given John Dean's idea for covering up Watergate."

What with their long hours and poor diets, Capitol Hill reporters often are lured to press briefings and events that promise hors d'oeuvres, if not bountiful buffets.

Then yesterday came this attention-grabbing advisory: "Conference Call on Surge Anniversary Today at 10 a.m. with Beers and Sen. Ben Nelson."

Unfortunately, it referred to Rand Beers, president of the National Security Network, who along with the Nebraska Democrat claimed the surge in Iraq has not achieved its goals one year after President Bush announced the strategy.