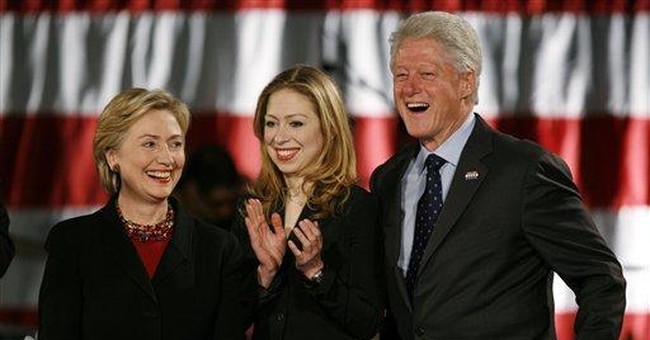 Portion of the U.S. population that has lived only under presidents named Bush and Clinton: one-quarter

Speaking of former first ladies, albeit one who is not currently criss-crossing snowy Iowa seeking caucus support, Barbara Bush, wife of former President George H.W. Bush and mother of President Bush, will return to Washington this month to participate in the "American Conversation" series at the National Archives, hosted by Archivist of the United States Allen Weinstein.

The series focuses on U.S. history and identity, and previously featured former first lady-turned-senator-turned-presidential aspirant Hillary Rodham Clinton. Mrs. Bush will discuss "family and friends in a public life" on Jan. 25. She most recently authored "Reflections," which documents a first lady's traditionally ordinary life after the White House.

For the second time in as many months, former Rep. J.C. Watts of Oklahoma, who when first elected in 1994 became only the second black Republican in the House since 1928, is critical of his party's presidential candidates because they "don't show up" for black voters.

"Republicans want to say we reach out. But what we do instead is 60 days before an election, we'll spend some money on black radio and TV or buy an ad in Ebony and Jet, and that's our outreach. People read through that," Mr. Watts said in an interview with the publication the Ripon Forum, which takes its name from Ripon, Wis., the birthplace of the Republican Party.

The Libertarian Party says active U.S. military personnel who are opposed to America sticking its nose — and troops — in other nations' affairs and borders represent a "sizable portion" of the party's 25 percent increase in membership during 2007.

"Military service men and women recognize the value in the Libertarian Party's non-interventionist foreign policy position," said the party's executive director, Shane Cory, a Marine Corps veteran. "Members of the armed forces, just like their civilian counterparts, feel betrayed by Republicans and Democrats, and are searching for an alternative."

It's tough being the new guy on the block, or shall we say new hand on the ranch.

If anybody working today in Washington political circles has paid his dues, it's Ed Gillespie, who last June was appointed counselor to President Bush. Consider that his very first job on Capitol Hill was working as an attendant in the Senate parking lot.

But it didn't take Mr. Gillespie long to move up the ladder, going down into the basement actually of the Republican National Committee (RNC) headquarters, where he became a nighttime telephone solicitor.

His enthusiasm and work ethic on behalf of the Republicans soon caught the attention of former House Majority Leader Dick Armey of Texas, who made Mr. Gillespie one of his top aides and set him to work with others on drafting the party's "Contract With America."

Mr. Gillespie eventually would return to the RNC, this time as head of communications. And after that stint he became one of Washington's most successful lobbyists, under the freshly painted shingle Quinn Gillespie & Associates.

In 2003, Mr. Bush lured him back into the party fold, appointing him the powerful chairman of the RNC. And finally, when the White House counselor post became open last summer, the president knew where to turn.

"He is a seasoned hand," Mr. Bush observed.

And that he is, or so it was revealed in yesterday's White House pool report, which notes Mr. Gillespie spent the New Year's holiday at the president's ranch in Texas, where he was "initiated in the protocol of presidential brush-clearing to make a path for the biker-in-chief."

Says the counselor: "I did not get to use the chain saw. I was relegated to the raking. New guy."