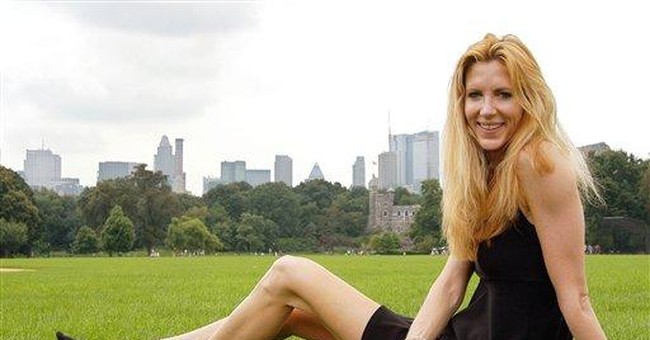 More than one reader got a kick out of the sequence of clues in the Washington Post's “Daily Crossword” for October 23, by Randall J. Hartman:

“This isn't Russia. This isn't China. This isn't name your country with leaders that crack down when they don't like what somebody says out there.” At least not yet, says Rep. Greg Walden, Oregon Republican. The congressman is warning that the reintroduction of the Fairness Doctrine, as proposed by Democrats to counter popular conservative viewpoints expressed over the airwaves, would be an inch towards “silencing government critics,” not to mention “oppression of a free press.”

Hollywood ranks are AWOL when it comes to fighting the war on terrorism, but fortunately that wasn't always the case.

The World War II-era contributions of several leading Hollywood filmmakers will warrant a special screening and discussion at the National Archives Building in the coming weeks. Among the acclaimed movie directors who quickly enlisted into the armed services and were assigned to film units are Frank Capra (”It Happened One Night,” “You Can't Take it With You”), John Huston (”The Maltese Falcon”), William Wyler (”Wuthering Heights,” “The Little Foxes”), John Ford (”Stagecoach, The Grapes of Wrath”), and George Stevens (”Alice Adams,” “Gunga Din”).

“During the second World War, there was recognition at the highest levels of government that the production of truly imaginative and inspiring films must be left to the talents of Hollywood's most creative minds,” Archives explains. “There, they contributed to an unprecedented endeavor to document the war and inform Americans, both overseas and on the home front, of their particular stake in the war effort.”

The screening and discussion will be held Nov. 14 at 6:30 p.m. in the William G. McGowan Theater.

Watching all the cable TV news coverage of the seasonal wildfires burning their way across southern California - and ultimately through the front doors of houses people insist on building on what is actually a desert floor - has left many Americans anxious.

Relax, he says, the “earth is not experiencing any kind of massive, higher than average (if there is even anything approximately an average) temperature. The warming that has occurred since around 1850 is the natural response to a previous mini-ice age that began in 1300. The earth has warmed about one degree or maybe a shade less.” Not feeling gay

Every presidential campaign finds some new group stepping out of the closet, some even twice.

This presidential primary season we are introduced to “Parents and Friends of Ex-Gays & Gays,” which wants homosexual activists to end their attacks against Donnie McClurkin, a black gospel singer and “former homosexual.”

Mr. McClurkin, the pro-former-homosexual group explains, is a Grammy Award winning singer orchestrating gospel concerts to raise funds for Sen. Barack Obama's presidential campaign. But now some homosexual activists are demanding that the Illinois Democrat drop Mr. McClurkin's voice from the fundraising. “Ex-gays . . . should not have to endure this type of abuse because they chose to leave homosexuality,” said Regina Griggs, the group's executive director, who finds it ironic that homosexual activists used the civil rights movement to win their own homosexual rights, yet turn against a black person who no longer wants to engage in homosexuality.