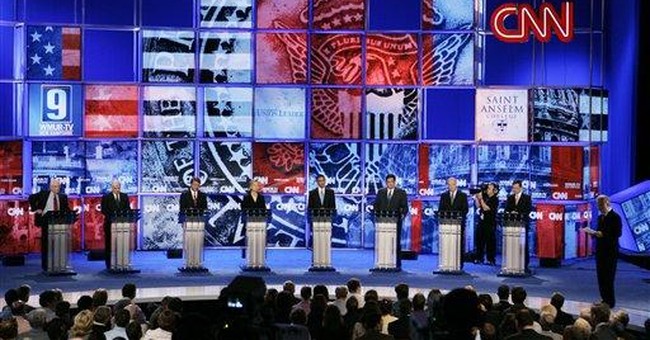 The White House pool report reveals that the Whole Hog Cafe "is located in a Rogers strip mall, right next to the Honeybaked Ham store, and a stone's throw from the Krispy Kreme."

Not getting your fill of presidential politics?

While that may seem difficult to believe, XM Satellite Radio will take over DC Coast restaurant this evening to celebrate the start of POTUS '08, the network's new 24-hour channel devoted exclusively to the 2008 presidential campaign.

Washington-born comedian Lewis Black, dubbed "America's foremost commentator on everything," will entertain XM's guests. Will Rogers would have been proud when Mr. Black commented: "Republicans are a party with bad ideas and Democrats are a party with no ideas."

However, our favorite line was when Mr. Black commented on the 750-mile fence being built along the Mexican border to keep illegal aliens out of the U.S.: "Walls haven't worked — not since they invented planes."

POTUS stands for President of the United States.

Congratulations to CNN District-based news anchor Wolf Blitzer and his "Situation Room" team for bringing home an Emmy Award for 2006 midterm election night coverage — when Democrats captured everything in Washington but the White House.

Meanwhile, explaining that it is leveraging the ratings successes and buzz surrounding two of its signature political programs, CNN will flip the time periods of "Lou Dobbs Tonight" and the third hour of "The Situation Room." Under the new schedule, the latter becomes a single, three-hour program from 4 to 7 p.m., leading into Mr. Dobbs' program at 7 p.m.

A rare bottle of whiskey, the first ever produced at a distillery of one U.S. president and signed by another U.S. president, has sold at auction for $35,000.

The bottle of George Washington's Straight Rye Whiskey, signed by former President George H.W. Bush, was No. 5 of a limited edition of 24 bottles produced by a team of master distillers on Oct. 21, 2003, at Washington's old distillery grounds near Mount Vernon. The whiskey was produced according to a historic recipe found in Washington's Mount Vernon mansion records. It was hand-bottled on Sept. 26, 2006.

One of Gen. Marshall's first recorded instances of speaking truth to power came in an encounter as a lieutenant colonel with Gen. John J. Pershing during World War I. Gen. Marshall's outspokenness, instead of receiving punishment, was rewarded with a post on Pershing's staff.

Gen. Marshall was later as outspoken with Winston Churchill, telling Britain's World War II prime minister that not a single American soldier would be permitted to die for the sake of Churchill's desired invasion of the Greek island of Crete. Gen. Marshall's outspokenness emboldened the British general staff, which supported his opposition, and Churchill withdrew the proposal.

Meanwhile, Gen. Lempke, adjutant general of Nebraska and a 1969 U.S. Air Force Academy graduate, noted the conspicuous and continuous service of National Guard units in the Iraq war and praised National Guard leaders for preparing their units so well.

"If the National Guard had not been there and ready, I don't know what would have happened to us," he said. "The National Guard was there with men and women ready to serve, though with minimal financing and resources."