All Cheney, All the Time 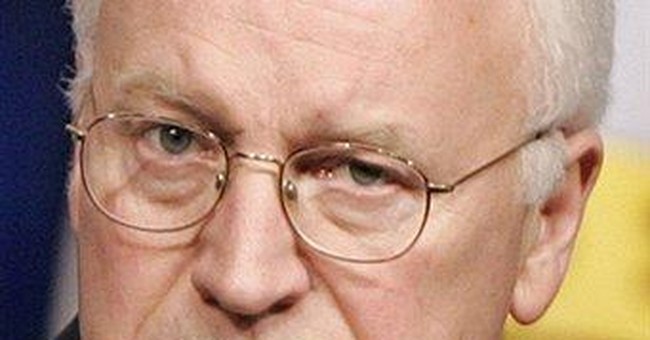 House Speaker Nancy Pelosi and her outspoken anti-Iraqi war colleague, Rep. John P. Murtha of Pennsylvania, are licking their wounds after a popular fellow Democratic leader — Washington Rep. Brian Baird, a senior Democratic whip on the Democratic Steering Committee, who was president of his 1998 freshman class — just returned home from Iraq to say that the U.S. military is "making real progress" in the war-torn country.

Furthermore, Mr. Baird told the Olympian newspaper, and despite Mr. Murtha's long-standing wishes for an immediate U.S. military withdrawal from Iraq, "the consequences of pulling back precipitously would be potentially catastrophic for the Iraqi people themselves ... and in the long run chaotic for the region as a whole and for our own security."

"It's going to be all Cheney all of the time."

Or so one Republican insider replied when asked by Inside the Beltway over the weekend who the Democrats will have left to beat up in the Bush White House now that Karl Rove has announced he is stepping down later this month as the president's deputy chief of staff.

"The pool ... listened to a concerto of crickets. This lasted for nearly 2½ hours."

— White House press corps pool report reflecting the more-often-grueling-than-not duty of staking out President Bush while he vacations at his Texas ranch.

"As you can imagine, this is a very difficult time for everyone associated with Ronald Reagan, especially Nancy Reagan. She is devastated," says Frederick J. Ryan Jr., chairman of the board of trustees of the Ronald Reagan Presidential Library Foundation.

"On Friday, she attended the funeral for Merv Griffin, a friend for 50 years. Saturday morning, she awakens to the news of Mike Deaver's passing. He had been among her closest of friends and confidants since the 1960s, when Ronald Reagan was governor [of California]."

Mr. Deaver, who for more than a decade has worked in the Washington office of the public relations firm Edelman, succumbed to pancreatic cancer at his Bethesda home. He was 69.

"As any advanceman or political operative will admit, to this day, the ultimate compliment on a presidential event is for it to be described as 'Deaveresque,' " Mr. Ryan, a former top Reagan aide, tells Inside the Beltway of the former White House deputy chief of staff, who orchestrated countless public appearances for Mr. Reagan, and in doing so helped to shape his popular presidency.

"He was a friend and mentor for so many of us," says Mr. Ryan. "He was willing to see the best in people, especially young people. I was 26 when I took the job to work on his part of the White House staff. And there were others younger than me who Mike was willing to take the chance on and see potential in them."

In the coming days, he adds, a special exhibition will go on display at the Reagan library in Simi Valley, Calif., in memory of Mr. Deaver.

"Although the impact he had on Ronald Reagan's presidency can be felt throughout the entire library, there will be a collection of photos of Mike taken with the Reagans over the years as well as a condolence book for visitors to pay their respects," says Mr. Ryan.

Jan Scruggs, founder and president of the Vietnam Veterans Memorial Fund (VVMF), which oversees "the Wall" in Washington, has arrived at the Hanoi Press Club in Vietnam, where today he will accept the Medal for Peace and Friendship Among Nations.

The medal is being presented by the Vietnam Union of Friendship Organizations, which recognizes and awards organizations for their "significant work" in helping to rebuild Vietnam.

While it continues to heal wounds in America, the VVMF since 2000 has been operating an anti-land-mine action and humanitarian program in Vietnam called Project RENEW.