How do you change gears without an arm? 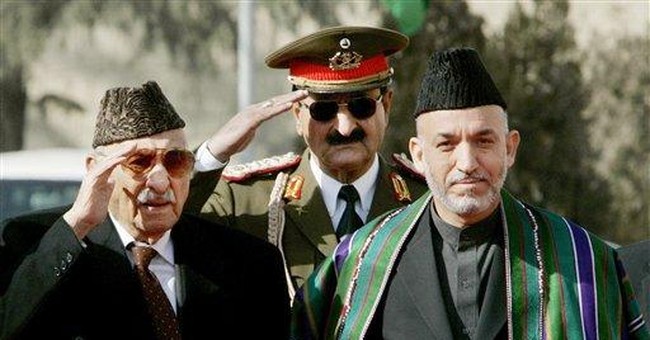 "It is our friends in Saudi Arabia, Jordan, Egypt, Morocco, the Gulf states and Israel who seem most apprehensive about [holding] any more [democratic] elections among the Arab masses. The Islamists seem to welcome them — and to succeed in them."

So is the irony pointed out by conservative commentator Pat Buchanan, questioning whether U.S. soldiers and Marines should continue to die for "democracy" in the Islamic world when, in fact, democracy may produce victory for the political progeny of what he calls the 1.2 billion and growing "Muslim brotherhood."

It's been eight months since Bob Barr, the former outspoken Georgia congressman who helped orchestrate the impeachment of President Clinton, quit the Republican Party and became a "proud, card-carrying Libertarian."

A lawyer in Atlanta, Mr. Barr in recent days slammed President Bush on the issue of privacy, which was a primary reason for him leaving the Republican Party in the first place. The former Republican is angry the president signed the new anti-terrorism law that amends the 1978 Foreign Intelligence Surveillance Act (FISA), which Mr. Barr contends violates the privacy rights of Americans.

Mr. Barr argues that the president and his administration "exaggerated the so-called threat [of terrorism] in order to play on the fears of members of Congress."

A Princeton economist seeks to put the risks Americans face from terrorism into "proper perspective" with his unique book due out next month.

Alan B . Krueger will explore three questions in "What Makes a Terrorist: Economics and the Roots of Terrorism," including who becomes a terrorist, where terrorism emerges and what terrorism accomplishes.

Bottom line: Terrorists are drawn from well-educated, high-income families and are more likely to be engineers and doctors, as opposed to those from uneducated and poor backgrounds. But more importantly, Mr. Krueger says Americans must correctly identify the root causes of terrorism, because "an accurate understanding of terrorists' motives can help us put terrorists' acts behind us, demystify terrorism, and enable society to move on and put the risks of future attacks into perspective."

The economist reminds readers in spite of widespread fear that foreign terrorists will attack the United States, 88 percent of terrorist attacks "occur in the perpetrator's country of origin."

Finally, don't assume long-term economic effects of terrorism are huge and crippling. The global loss of about $6.4 billion per year owing to terrorism is a comparatively small share of the gross domestic product (GDP), or only about 0.064 percent.

So terrorism, Mr. Krueger concludes, "only matters in a big way if we let it matter."

The all-urban 14th Congressional District, which consists of nearly half of Detroit and most of Dearborn, has America's largest Arab-American community, with 30 percent of the population claiming Arab ancestry.

As part of its series called Presidential Film Favorites, the National Archives has been screening the favorite films of various U.S. presidents.

We're not sure about Mr. Kennedy, but this columnist's favorite part of the film is when Macreedy climbs behind the wheel of a U.S. Army truck with standard transmission, yet somehow manages to shift the gears without an arm.